The Cold War and Indigenous People 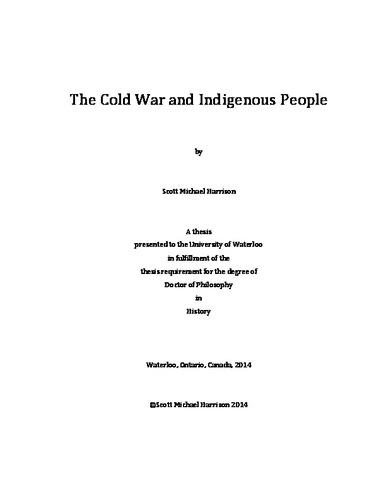 The second half of the twentieth century saw dramatic state movements and expansions around the world into Indigenous people’s territories. These state expansions incorporated more of the earth than any time in the past and this shaped Indigenous – non-Indigenous relations around the world. This study examines global post-1945 Indigenous people’s history through the lens of the Cold War. Themes addressed herein on the intersections of Indigenous people and the Cold War include modernity, non-Indigenous components of indigenism, decolonization, Cold War structures—particularly the San Francisco System in the Asia-Pacific—, and the nuclear arms race. This study offers a new perspective on the global movement of Indigenous people during the second half of the twentieth century and expands Cold War history beyond interstate relations. It argues that the extent of change in Indigenous societies during the four and a half decades after World War II were so immense that we can place the Cold War alongside other broad patterns of global forces influencing the shape of Indigenous history, including first contacts, the spread of epidemic diseases, missionary work, and colonialism, and that Indigenous territories were essential geographies for waging Cold War.