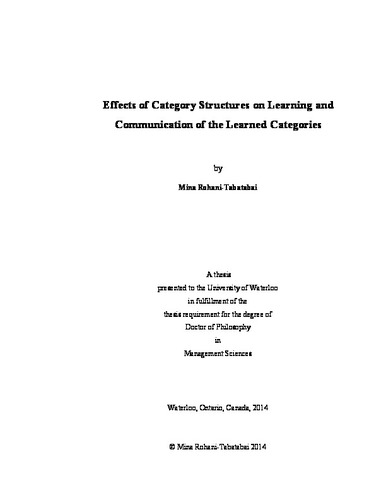 Communication is an essential part of our life, and is tightly connected to our knowledge. We communicate about what we know, and form our knowledge through communication. This research uses the categorical representation of knowledge and examines how differences in the structure of categories affect the processing of information in category learning and the communication of the learned categories. The structure of categories is defined through the concept of variability; its effects on the efficiency in learning, effectiveness of communication, and the pattern of interactions between people with different categorical knowledge were studied. Four hypotheses were tested within the context of three experiments. The first hypothesis tested the effects of category structure on the number of features to which the learners pay attention. The second hypothesis investigated the effects of the category structure on the complexity of the theories developed in category learning. The third hypothesis tested how the category structure influences the effectiveness of communication, and the fourth was developed to indicate how the communicators who learned about categories with different structures influence each other in the course of communication. The participants in this study learned about categories of natural stimulus, flowers from two geographical regions, with either complex or simple structure, and then they communicated the learned categories. The communication process was investigated in two ways: one-way and two-way communication. The results of the experiments indicated that the structure of the categories influenced the the number of the features that the participants paid attention to. Participants who learned about complex categories developed a more complicated theory, and were less effective in communicating their theory. In addition, the structure of their knowledge influenced the pattern of interaction among them; as a result, the participants who learned the more complex categories were more influential in the course of interaction. The detailed analyses of the communication process, the results and potential contributions are discussed.

Mina Rohani-Tabatabai (2014). Effects of Category Structures on Learning and Communication of the Learned Categories. UWSpace. http://hdl.handle.net/10012/8568