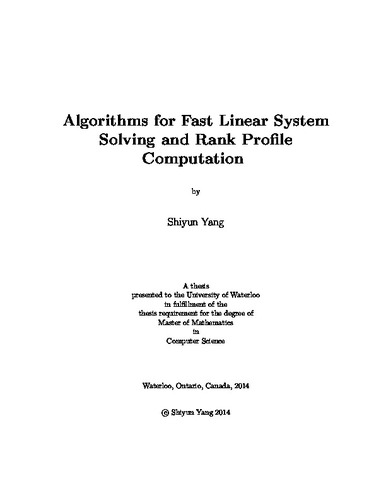 We give randomized algorithms for linear algebra problems concerning an n*m input matrix A over a field K. We give an algorithm that simultaneously computes the row and column rank profiles of A in 2r^3 + (r^2+n+m+|A|)^{1+o(1)} field operations in K, where r is the rank of A and |A| denotes the number of nonzero entries of A. Here, the o(1) in our cost estimates captures some missing log n and log m factors. The rank profiles algorithm is randomized of the Monte Carlo type: the correct answer will be returned with probability at least 1/2. Given an n*1 vector b, we give an algorithm that either computes a particular solution vector x of dimension m*1 to the system Ax = b, or produces an inconsistency certificate vector u of dimension 1*n such that uA = 0 and ub is not equal to 0. The linear solver examines at most r+1 rows and r columns of A and has running time 2r^3 + (r^2+n + m + |R|+|C|)^{1+o(1)} field operations in K, where |R| and |C| are the number of nonzero entries in the rows and columns, respectively, that are examined. The solver is randomized of the Las Vegas type: an incorrect result is never returned, but the algorithm may report FAIL with probability at most 1/2. These cost estimates are achieved by making use of a novel randomized online data structure for the detection of linearly independent rows and columns. The leading term 2r^{3} in the cost estimate 2r^3 + (r^2+n+m+|A|)^{1+o(1)} of our rank profile algorithm arises from our use of an iterative algorithm to compute, for s=1,2,...,r, the inverse of the leading principal s*s submatrix B_s of an r*r matrix B that has generic rank profile, and whose rows are given from first to last, one at a time, for s=1,2,...,r. These inverses are used to compute a sequence of subsystem solutions B_{s}^{-1}b_s for s=1,2,...,r, where b_s is the leading subvector of b. We give a relaxed algorithm that computes the sequence B_1^{-1}b_1,\,B_2^{-1}b_2,..., B_r^{-1}b_r in an online fashion in time O(r^{\omega}), effectively allowing matrix multiplication to be incorporated into our rank profile algorithm. Together with a Toeplitz preconditioner, we can compute the row rank profile of a full column rank matrix A in time (r^{\omega}+|A|)^{1+o(1)}. Combined with Cheung, Kwok and Lau's (2013) algorithm for computing a maximal rank subset of linearly independent columns, this gives a Monte Carlo algorithm that computes the row rank profile of A in time (r^{\omega} + |A|)^{1+o(1)}.