Hydrogenation of Nitrile and Olefinic Groups in Butadiene Rubbers 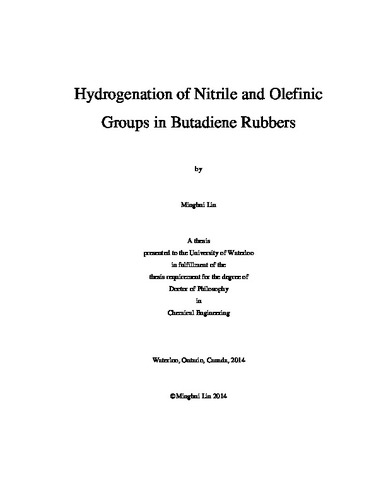 Nowadays, traditional diene-based polymers cannot meet the demand for robust elastomers in many industries. Acrylonitrile butadiene rubber (NBR) is a widely used diene-based polymer as an oil-resistant elastomer and is produced via copolymerization of acrylonitrile (AN or ACN) and butadiene (BD). When dealing with aggressive environments, NBR’s performance decreases rapidly due to the residual carbon-carbon double bonds in the polymer backbone. By selectively hydrogenating these unsaturated bonds to yield its more stable counterpart, hydrogenated NBR (HNBR), the mechanical, thermo-oxidative and chemical resistant properties of a material are greatly improved. The ACN content of NBR and HNBR also determines a number of properties including oil and solvent resistance, compatibility with polar solvent and abrasion resistance etc. HNBR with lower ACN content can be cured without sulfur which improves heat resistance and is much more environmentally friendly. In the present research project, a rhodium hydrido complex was screened and synthesized; a corresponding catalytic system was successfully established to produce HNBR with a certain amount of ACN. It is worthwhile to point out that this thesis is the first development in establishing a system that is able to reduce nitrile content of the macromolecular polymers (NBR and HNBR), and to achieve tandem hydrogenation of both nitrile groups and olefinic groups in the macromolecular polymer (NBR). In both HNBR and NBR systems, the nitrile content can be reduced from 40% to less than 10% within 5 hours at 60oC and 500 psig H2. The nitrile groups have been converted to primary amines without any side products such as the formation of secondary amines. A possible mechanism for nitrile reduction has been proposed for the first time. The causes for gel formation during nitrile reduction have been investigated and a possible mechanism is proposed. Several additives have been tested and some of them are found to be effective to slow down or terminate gel formation, and tryphenylphosphine (TPP) was found to be the most effective additive. In the NBR system, tandem hydrogenation of nitrile and olefinic groups has been successfully achieved. The nitrile reduction process is similar to that of the HNBR system. The olefinic groups were reduced from 100% to lower than 5% simultaneously under the same reaction conditions. A possible mechanism for tandem hydrogenation has also been proposed for the first time. An effective catalytic system for the hydrogenation of carbon-carbon double bonds in styrene butadiene rubber (SBR) was successfully developed using the same Rh catalyst. In the absence of any additives, the C=C bonds in SBR were hydrogenated to more than 95% in a relatively short period of time and no cross-linking was observed. Optimization of experimental conditions has been carried out for eco-friendly and energy-saving purposes. Different experimental parameters have been studied. The properties of SBR did not change after hydrogenation of the unsaturated C=C bonds. This study provides a new route for the chemical modification of SBR by using a transition metal complex. Additionally, NBR in the form of latex has been successfully hydrogenated to high conversion by using RhCl3 without any organic solvent. NBR latex can be hydrogenated to a degree of more than 95% within 5 hours at 160oC using RhCl3 in the presence of triphenylphosphine (TPP). Various experimental parameters were investigated. Wilkinson's catalyst is synthesized in situ during the hydrogenation. TPP is the co-catalyst ligand in the latex hydrogenation using RhCl3 and also a catalyst mass transfer promoter and reducing agent. Ethanol is a very effective co-solvent for TPP and RhCl3 (but not for the rubber).