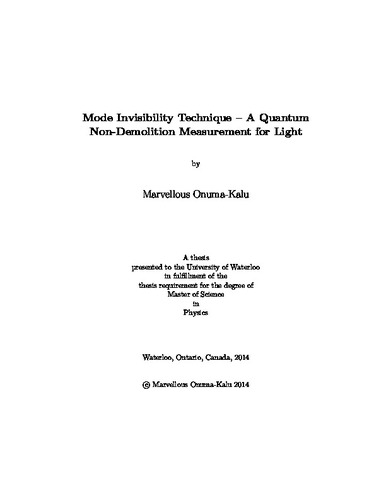 The act of measuring an observable of a quantum system introduces backaction noise to the measured system. In the most extreme case, the system gets destroyed with its state left unavailable for future measurement. An example is the photodetection process where photons are destroyed upon detection. It is desirable to consider schemes that avoid the back action effect induced on detected observable due to the measurement. Such measurement scheme in which one is able to repeat a measurement on a physical observable, with the result of each measurement being the same for all measurement times is known as quantum non-demolition (QND) measurement. With the QND measurement idea, it has become possible to detect photons without destroying its state. In this thesis, we present an optical QND measurement scheme known as the Mode invisibility technique to measure a quantum state of light. Unlike other optical QND measurement scheme for photon detection, we show in this thesis that we can take advantage of the spatial distribution of cavity modes to minimize the measurement back action inherent during an atom-light field interaction. Our method is robust and applicable to detect the parameters that characterize a family of Gaussian state. We show that we obtain a very good resolution to measure photon population differences between two given Fock states by means of atomic interferometry.