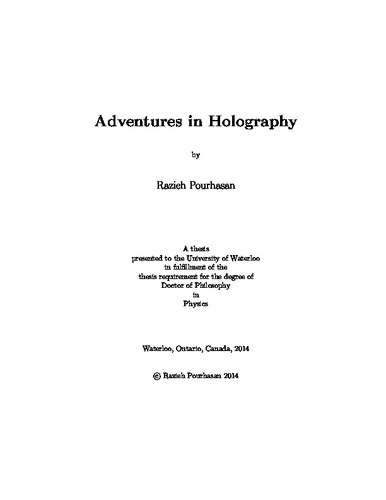 In this thesis, inspired by the holographic theories, we study a variety of interesting problems in gravity, condensed matter and cosmology. First, we explore the entanglement entropy of a general region in a theory of quantum gravity using holographic calculations. In particular, we use holographic entanglement entropy prescription of Ryu-Takayanagi in the context of the Randall-Sundrum 2 model with considering three kind of gravity theory in the bulk: the Einstein gravity, the general f(R) gravity and the Gauss-Bonnet gravity. Showing the leading term is given by the usual Bekenstein-Hawking formula, we confirm the conjecture by Bianchi and Myers for this theory. Further, we calculate the first subleading term to entanglement entropy and show that they agree with the Wald entropy up to the extrinsic curvature terms. Then, we study the holographic dual of what is known as quantum Hall ferromagnetism in condensed matter theory. This phenomenon, which has been observed in graphene sam-ples by applying strong magnetic field, is the emergence of energy gaps and Hall plateaus at integer filling fractions due to occurrence of spontaneous symmetry breaking. This effect is partially understood with certain perturbative calculations at weak coupling. The question is then whether this feature survives in a strongly coupled system as well. To address this question, we apply a well-established string theory dual, namely the D3-D5 system. In this framework, coincident D5 and D7-branes are embedded in the AdS5 × S5 background of the D3-branes. Within this holographic set-up and through the numerical calculations, we investigate the possibility of spontaneous symmetry breaking and find interesting phase transitions at finite temperature. Finally, we introduce a holographic description of our four-dimensional universe through a “brane world” scenario known as the Dvali-Gabadadze-Porrati (DGP) construction, where the brane refers to our universe embedded in a bulk space-time with five or more dimensions. In fact, we examine the DGP model as a theory of five-dimensional Einstein gravity coupled to four-dimensional branes while we assume five-dimensional spherical black hole metric in the bulk. Then, we study the phenomenological viability of the brane around this five-dimensional black hole. Further, we relate bulk, brane, and black hole parameters and the observational constraints on them. We find that viable solutions are indeed possible, hence we propose a holographic origin for the big bang. In particular, we suggest that our four-dimensional brane emerges from the gravitational collapse of matter in five dimensions which avoids the big bang singularity.