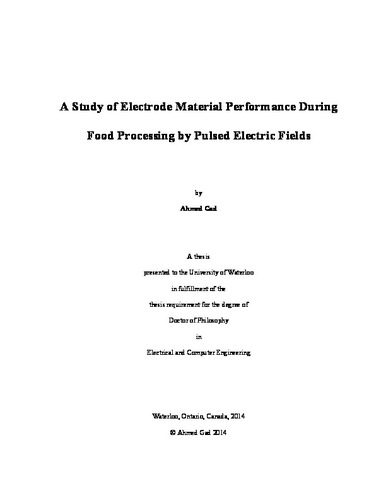 Upon the application of high-field pulses across a liquid food product (such as milk, juices, or beer), electric charge accumulates across the membrane of any microbial cell present in the processing zone between the two electrodes. Within a few hundred nanoseconds, this charge accumulation results in an irreversible membrane breakdown which causes the cell to lose its viability. By this means, an extended shelf-life could be achieved. Thus, the use of pulsed electric fields (PEFs) provides an alternative method to preserve liquid food products instead of the conventional thermal pasteurization. The advantages of using the PEF processing over conventional thermal pasteurization include greater retention of the original nutritional value and fresh-like taste, less usage of processing energy, and lower contamination from the processing equipment. Physical and electrical contact between the liquid food product and the metallic electrodes during the PEF processing is unavoidable and causes some metallic ions to be released from the electrodes into the processed food. This undesirable release of metallic ions from the electrodes can affect food safety and taste, degrade food compounds/color, and shorten the electrode lifetime over a long period of use. As such, it represents one of the main challenges for the commercialization of such non-thermal preservation technique. In this study, the concentration of released metallic ions in PEF-processed milk, orange juice, and beer has been determined using the inductively coupled plasma – atomic emission spectroscopy (ICP-AES) under various operating conditions. It has been found that the mitigation of arcing events protects the electrode surface from experiencing “pits”, which is one source of metallic ion release. For electrochemical reactions, satisfying a “zero net charge delivery” reduces the metallic content of PEF-processed foods considerably. Allowing the charging current of the generator’s capacitor to flow through the PEF processing chamber is used here to ensure the zero net charge delivery with mono-polar pulses. Lower metallic content has been obtained by using pulses of shorter width; this observation agrees with the nature of an electrically-driven electrochemical process. Variation in the voltage peak, within the typical PEF conditions, did not have a significant effect on metal release. The comparison of the behavior of electrodes coated with chromium, nickel, silver, and titanium has revealed the superior performance of titanium. A solid titanium electrode did not lead to any detectible metal release after PEF processing of milk (neutral) and orange juice (acidic); whereas, the concentration of iron from stainless steel electrodes was detectible in both liquids. The temperature of the PEF processing zone did not influence the metallic content when varied in the range from 1° to 30ºC. The study also highlights the applicability of the PEF processing on carbonated beer, in particular through a sealed and pressurized processing chamber. Brewery regulations in Canada do not necessitate the thermal pasteurization of carbonated beer; hence, PEF processing finds a potential application in the beer industry. Sensory panels have shown that PEF-processed beer is preferred when compared to thermally pasteurized beer with respect to flavor, aroma, and foam condition. Untrained panelists preferred samples processed with low-dosage of PEF in week 0, but preferred samples with high-dosage in week 12 of the shelf-life. Trained panelists reported a metallic feeling in the PEF-processed beer which could be due to the presence of metallic ions that was detected analytically.