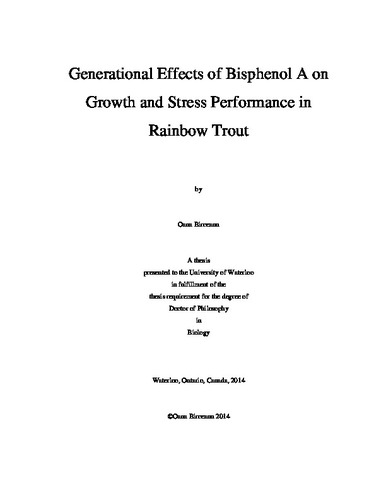 The aquatic environment is severely impacted by xenobiotics that are released due to anthropogenic activities, threatening ecosystem health. Some of these contaminants accumulate in lipophilic fish tissues and are maternally transferred to developing offspring, affecting their growth and performance. However, knowledge about the long-term and generational impacts associated with maternal transfer of contaminants is limited in fish. In this thesis, the hypothesis tested was that maternal transfer of bisphenol A (BPA) leads to disruption in the developmental programing of growth and stress axes functioning in rainbow trout (Oncorhynchus mykiss), and that these changes are passed on to the next generation. This was tested by exposing oocytes to either control (vehicle; <0.01% ethanol) 0.3, 3.0, and 30.0 mg l-1 BPA in ovarian fluid for 3 h, prior to fertilization, to mimic maternal transfer. This led to the accumulation of 0, 0.8, 4.4 and 41.3 ng BPA embryo-1. Oocytes were fertilized with milt from clean males, and offspring growth, development and stress performances were assessed in a clean environment for a year (F1 generation). For F2 generation, oocytes collected from F1 females, raised from the different BPA accumulated eggs, were fertilized with milt from clean males and raised in a clean environment for one year as described for F1 generation. The accumulated BPA in eggs was quickly cleared and it was no longer detected in the F1 embryos at hatch. BPA exposure reduced specific growth rate and increased food conversion ratio in larvae reared from BPA-laden oocytes. Moreover, BPA-exposed fish had an altered cortisol developmental profile and a delay in stress axis maturation. In addition, the mRNA abundance of genes involved in somatotropic [insulin-like growth factor (IGF) -1; IGF-2; IGF receptor b (IGF-1rb)] and stress axes functioning [steroidogenic acute regulatory protein (StAR); cytochrome P450 side chain cleavage (P450scc)] were altered. Also, changes in thyroid signaling [thyroid receptor (TR) mRNA levels] and cortisol signaling [glucocorticoid receptor (GR) protein expression] were disrupted temporally during development. These results demonstrate that BPA accumulation in eggs, mimicking maternal transfer, impacts growth and development, and delays stress axis maturation via non-reproductive endocrine disrupting routes in trout. Some of the BPA changes seen in F1 generation also persisted in the F2 generation. For instance, ancestral exposure to BPA led to reduced growth and whole body glycogen content prior to feeding in the F2 fish. The developmental transcript profile of growth hormone-1and -2, IGF-1 and -2 and IGF-1rb, along with whole body cortisol levels were impacted by ancestral exposure to BPA. Moreover, a delay in cortisol dynamics post-stress was noted in the F2 fish of BPA exposure lineage. Our results show that ancestral exposure to BPA leads to effects on growth and stress performance in rainbow trout, but the mechanism is not known. To further investigate the long-term effect of BPA accumulation in eggs on stress performances, F1 and F2 juvenile fish were subjected to an acute stressor. Also, head kidney tissues from these juvenile fish were subjected to adrenocorticotrophic hormone (ACTH) stimulation in vitro to assess cortisol production capacity. BPA accumulation in eggs led to a reduced acute handling stressor-induced plasma cortisol response in trout from the F1 and F2 (only high BPA group) generations. Also, BPA exposure had a pronounced impact on acute handling stressor-mediated plasma glucose (only F2 generation) and lactate levels, indicative of a metabolic disturbance. BPA exposure (only the 4.4 ng group) did affect unstimulated but not stimulated [ACTH or 8-bromo-cyclic AMP (8-B-cAMP)] cortisol production from head kidney slices of juvenile fish from F1 generation. In the F2 generation, there was an increase in ACTH-stimulated cortisol production only from the high BPA-exposed group. Overall, BPA in eggs disrupts long-term cortisol and metabolic stress performances in rainbow trout. While the impaired plasma cortisol stress performance was dose-related in the F1, the effect was apparent only for high BPA group in the F2 generation, suggesting that the generational effects on cortisol stress axis functioning may be concentration-dependent. A metabolomics approach further confirmed multigenerational effects associated with BPA accumulation in eggs. Analysis of the metabolome profile at hatch and prior to first feed, using gas chromatography-time of flight-mass spectrometry (GC-TOF-MS), revealed a BPA-mediated metabolic disruption, including changes in pathways involved in carbohydrate, lipid and amino sugar metabolism, and amino acid metabolism and synthesis. Pathways involved in citric acid cycle and alanine, aspartate and glutamate metabolism were altered in both generations, suggesting that these pathways have the potential to be markers with predictive value for multigenerational effects of BPA in fish. Altogether, the study provides novel insights on the impact of BPA on rainbow trout metabolome at hatch and first feed. The results suggest that pathways involved in energy metabolism are targets for BPA impact and should be investigated as potential markers for BPA toxicity. Overall, BPA accumulation in oocytes induces long-term delays in growth and stress axis maturation in F1 generations fish, and these effects persist in the F2 generation. The developmental profiles of key genes of the somatotropic and HPI axes were altered by BPA, along with whole body composition, suggesting that BPA exposure leads to a metabolic disturbance in fish, resulting in reduced growth. Additionally, the altered plasma cortisol response to acute stress in F1 and F2 juveniles provides evidence for multigenerational effects of BPA on stress axis functioning. The current study proposes that BPA-induced epigenetic modifications during early development may be playing a key role in the generational effects on growth and stress axes disruption in trout. The finding that the growth and developmental changes to BPA exposure also corresponds with endocrine and metabolome changes in multiple generations in trout is novel, and underscores the necessity to develop new risk assessments tools for chemicals that are maternally transferred in fish.