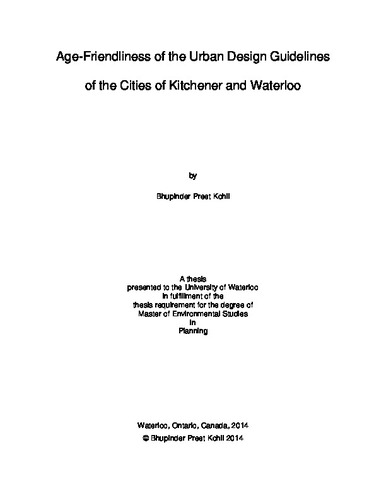 The fastest growing age group in Canada is seniors aged 65 years or older (Statistics Canada’s 2006 & 2007). The population of seniors is projected to increase to 6.7 million by 2021 and 9.2 million by 2041 (nearly one in every four Canadians) (Social Development Canada, 2006a; Statistics Canada, 2007b). Similarly, Population Estimates, Waterloo Region and Ontario, 2011 and Population Projections, Waterloo Region and Ontario, 2016, 2026 & 2036 (Region of Waterloo, 2012b, 2012c) indicate that the Region of Waterloo expects an increase in its senior population by 145.4% from year 2011 to 2036. Due to increased longevity and an increased percentage of older adults, this demographic shift poses challenges for communities, including increased healthcare costs and social isolation among seniors, which may threaten their active participation in the community. The research question ‘Do urban design guidelines of the Cities of Kitchener and Waterloo address the needs of an ageing population?’ motivates this study to examine the Urban Design Manuals of the Cities of Waterloo and Kitchener to determine the age-friendliness of the current urban design guidelines, and the role of the built environment in active ageing. The current urban design guidelines of the Cities of Kitchener and Waterloo are compared with the Design of Public Spaces Standards (Accessibility Standards for the Built Environment) by Accessibility for Ontarians with Disabilities Act, 2005 (AODA); the Universal Design Principles; key findings based on the literature review (Levine, 2003; Story, Mueller, & Mace, 1998); and analysed with in-depth knowledge gained through semi-structured interviews with seniors, planners, and focus groups. The participation of the seniors provided information on the gaps between what already exists and what is required. The key finding of the report is that the urban design guidelines of the Cities of Waterloo and Kitchener are fairly comprehensive in addressing the needs of seniors, but there is inadequate implementation of these guidelines.

Kohli Bhupinder Preet (2014). Age-Friendliness of the Urban Design Guidelines of the Cities of Kitchener and Waterloo. UWSpace. http://hdl.handle.net/10012/8549