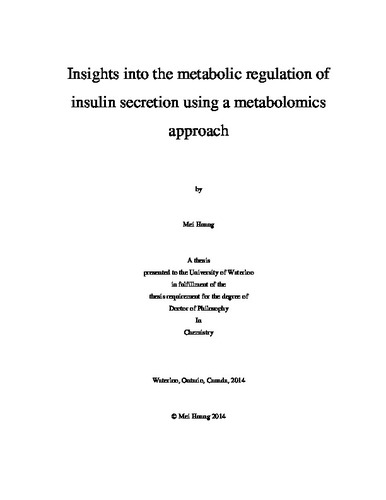 In the post genomic era, metabolomics, as an integrated part of system biology, offers a promising approach to identify biomarkers associated with diseases and hence has been widely used in disease diagnosis, toxicology, plant science, and pharmaceutical and environmental research. Based on the specific study goals, metabolomics involves two major categories: targeted and untargeted. Unlike targeted metabolomics with well-established analysis method, untargeted metabolomics still needs to overcome some technical challenges. This dissertation attempts to address these challenges and to establish a feasible untargeted metabolomics platform from sample preparation to data interpretation and biologically meaningful validation. In this dissertation, gas chromatography-mass spectrometry (GC-MS) was used as the analytical instrument to detect and identify metabolites. This GC-MS based untargeted metabolomics was successfully applied to study four different aspects of glucose-stimulated insulin secretion (GSIS), including the biochemical mechanism underlying insulin secretion, biphasic insulin secretion, time-dependent effects (TDE) of glucose on insulin secretion, as well as the role of alpha-ketoglutarate dependent hydroxylation in regulation of insulin secretion. GSIS was identified by orthogonal partial least squares (OPLS) to be associated with not only glycolysis and tricarboxylic acid cycle (TCA cycle), but also the pentose phosphate pathway (PPP), the sorbitol-aldose reductase pathway as well as aspartate. The characterization of the kinetics of insulin secretion revealed that alpha-ketoglutarate, succinate and hydroxyproline were the metabolites strongly associated with the second phase of biphasic insulin secretion. Study of TDE by using a metabolomics approach showed that the time-dependent inhibition (TDI) of glucose on insulin secretion is mainly regulated by redox state in pancreatic beta cells, since it was suggested to be correlated to the decreased ratio between dihydroxyacetone phosphate (DHAP) and alpha-glycerolphosphate (alpha-GP). This was probably the result of the reduced malate-aspartate shuttle activity and lower lactate output in beta cells. On the other hand, time-dependent potentiation (TDP) might be mediated by succinate-regulated pro-insulin biosynthesis. Finally, alpha-ketoglutarate dependent hydroxylation was found to be a master regulator that controls glucose metabolism as well as glucose derived anaplerosis, a finding which, if true, provides a positive feedback loop for the secretion function of pancreatic beta cells. Overall, this GC-MS based untargeted metabolomics approach was established and then was used to study the mechanism of GSIS. Alpha-ketoglutarate was revealed to be critical to kinetically coupling glucose metabolism to (especially the second phase of) insulin secretion probably via an alpha-ketoglutarate dependent hydroxylation mechanism.