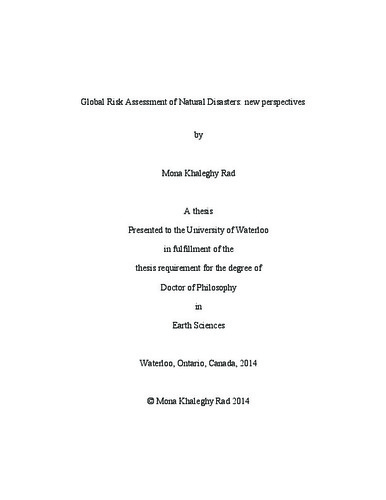 Natural disasters such as earthquakes, tsunamis, landslides and volcanic activities has had devastating effects on human life. Risk is the probability of harmful consequences from the interaction of hazards and vulnerable conditions. With increasing numbers of people living in crowded cities and other vulnerable areas, it is more important than ever to advance our understanding of natural disasters and the ways in which humans respond to them. My interdisciplinary study reflected in my thesis includes integrated research on the risk assessment methods for natural hazards with focus on earthquake disasters. This thesis address firstly the development of a scaled risk assessment framework, comparative assessment of natural hazard losses, including respective case studies and global overview of natural hazard risk, and secondly a comparative risk assessment of geological disasters to elaborate the major disastrous hazards for global population. Furthermore, I evaluate the effect of past events in form of the number of losses with respect to the exposed population on the proneness of people to the disaster. I summarize acceptable risk criteria and the necessity of having a normalized framework for societal risk assessment. I evaluate the natural hazard risk assessment and acceptable risk criteria of 32 European countries. I also introduce the concept of resistance in both risk equation and in FN-curves. Resistance is the societal resilience of a society to the occurrence of a natural disaster. Moreover, using components of FN-curves (slopes and intercepts) for risk assessment of geological disasters based on real data, I showed that the world has been more at risk of earthquakes than tsunamis, volcanic activities and landslides since 1600. Also. based on the earthquake disasters data (1973-2010), I evaluated the temporal trend of hazard, risk, exposure and resistance of the world towards earthquake disasters. Our results does not provide any evidence of increase or decrease in the temporal trend of fatality rate and earthquake resistance while there is a significant decrease in the crude death rate. Finally, we evaluated the reliability of earthquake disaster system during 1950-2012 using probability of more than 1000 fatalities as probability of failure. Our yearly estimate of reliability at the beginning of each mission year shows that the avreage reliability of earthquake disaster system is very low (~0.3) and it is decreasing over time, too.