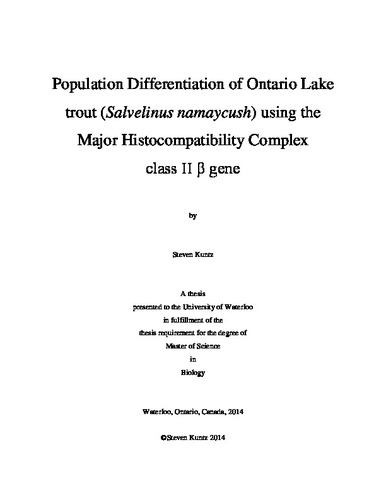 The lake trout (Salvelinus namaycush) is a coldwater salmonid with an extensive native distribution across formerly glaciated regions of North America. Lake trout are known to be a glacial ‘relict’ species and evolved as a result of glaciation events during the Pleistocene era. Historic and recent human activities along with climate change have had a significant influence on the phylogeographic and genetic compositions of current lake trout populations. Human activities like overexploitation, habitat degradation and most importantly stocking have had detrimental effects on the diversity and variability of populations within Ontario. Prior genetic studies of lake trout have used multiple neutral genetic marker systems including allozymes, microsatellites and mitochondrial DNA (mtDNA) to distinguish multiple glacial refugia and phylogeographic lineages within North America. This project differentiated lake trout populations within Ontario using a non-neutral marker, the major histocompatibility (MH) class II beta gene. A total of fifty-seven unique MH class II β1 alleles were identified in 216 individual lake trout from ten lakes across Ontario and one in New York. Native, hatchery stocking sources and native but stocked lake trout populations were characterized for MH diversity and allelic states to assess their diversity and divergence. A geographic map of MH diversity within each lake was completed. Commonly stocked lakes within Ontario have shown a decreased amount of allelic diversity when compared to other populations. The introgression of MH class II beta alleles within the mixed-ancestry populations and the significance of adaptive genetic diversity within and among populations from different histories will be important for the management of lake trout facing future climatic and ecological conditions.