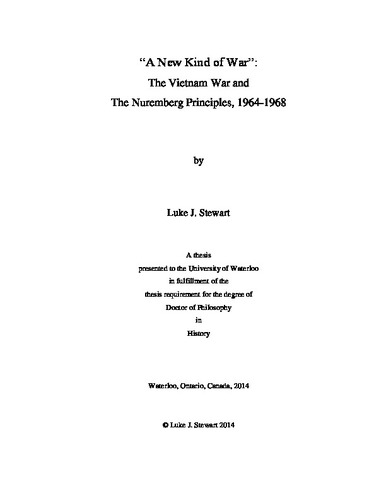 This thesis explores what Telford Taylor called the “ethos of Nuremberg” and how it shaped antiwar resistance during the Vietnam War in the United States. The Vietnam War was a monumental event in the twentieth century and the conflict provided lawyers, academics, activists, and soldiers the ability to question the legality of the war through the prism of the Nuremberg Principles, the various international treaties and U.S. Constitutional law. As many legal scholars and historians have lamented, the Cold War destroyed hopes for the solidification of an international court empowered to preside over questions of war crimes, crimes against humanity and crimes against peace. In the absence of cooperation among the international community, the antiwar movements in the United States and around the world during the Vietnam War utilized these legal instruments to form what I call a war crimes movement from below. A significant component of this challenge was the notion that individual citizens – draft noncooperators, military resisters, tax resisters, and the like – had a responsibility under the Nuremberg Principles to resist an illegal war. In the numerous United States military interventions after World War II, none had been challenged as openly and aggressively as the war in Vietnam. As this thesis will demonstrate, the ideas that crystallized into action at Nuremberg played a major role in this resistance.