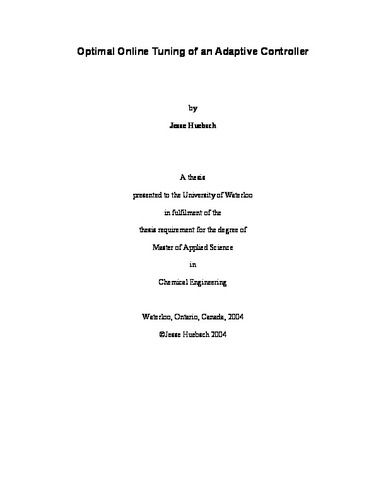 A novel adaptive controller, suitable for linear and non-linear systems was developed. The controller is a discrete algorithm suitable for computer implementation and is based on gradient descent adaptation rules. Traditional recursive least squares based algorithms suffer from performance deterioration due to the continuous reduction of a covariance matrix used for adaptation. When this covariance matrix becomes too small, recursive least squares algorithms respond slow to changes in model parameters. Gradient descent adaptation was used to avoid the performance deterioration with time associated with regression based adaptation such as Recursive Least Squares methods. Stability was proven with Lyapunov stability theory, using an error filter designed to fulfill stability requirements. Similarities between the proposed controller with PI control have been found. A framework for on-line tuning was developed using the concept of estimation tracks. Estimation tracks allow the estimation gains to be selected from a finite set of possible values, while meeting Lyapunov stability requirements. The trade-off between sufficient excitation for learning and controller performance, typical for dual adaptive control techniques, are met by properly tuning the adaptation and filter gains to drive the rate of adaptation in response to a fixed excitation signal. Two methods for selecting the estimation track were developed. The first method uses simulations to predict the value of the bicriteria cost function that is a combination of prediction and feedback errors, to generate a performance score for each estimation track. The second method uses a linear matrix inequality formulation to find an upper bound on feedback error within the range of uncertainty of the plant parameters and acceptable reference signals. The linear matrix inequality approach was derived from a robust control approach. Numerical simulations were performed to systematically evaluate the performance and computational burden of configuration parameters, such as the number of estimation tracks used for tuning. Comparisons were performed for both tuning methods with an arbitrarily tuned adaptive controller, with arbitrarily selected tuning parameters as well as a common adaptive control algorithm.