Sharing Matters of the Heart: The Importance of Emotional Disclosure for Cardiac Patients and their Spouses 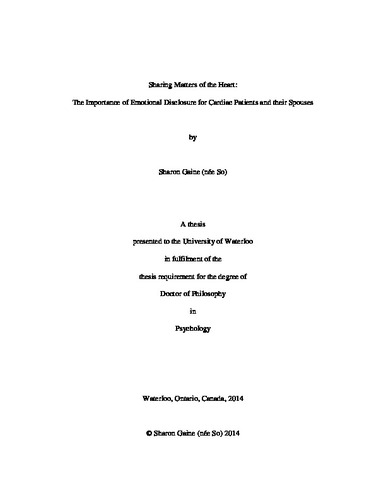 Previous research has suggested that emotional expression is important for psychological adjustment to disease (e.g., Stanton et al., 2000). Indeed, experimentally prescribed emotional disclosure (traditionally, expressive writing) in the context of illness has been shown to provide benefits for mental and physical health (Pennebaker, 1993). However, the experimentally prescribed disclosure in previous research has typically been asocial, akin to writing in a diary. In contrast, the present research, by experimentally manipulating the intended audience of one’s disclosure, examined the effect of addressing one’s emotional disclosure to specific types of listener, namely a therapist or one’s spouse. Cardiac couples in which one partner had a recent cardiac event took part in the current study. First, partners completed pre-study characteristics questionnaires. Next, in a lab session, partners (in separate rooms) were randomly assigned to one of three conditions: (1) they disclosed their thoughts and feelings about the cardiac event as though speaking to their partner; (2) they disclosed their thoughts and feelings about the event as though speaking to a therapist; or (3) in a non-disclosure, control condition, they spoke about a neutral topic. Partners then engaged in a dyadic discussion about each partner’s experiences, thoughts and feelings about the cardiac event. Finally, a one-month follow-up measure assessed their relational outcomes since participation. It was hypothesized that the partner-oriented condition would lead to better outcomes than the therapist-oriented condition, and that disclosing overall would be more beneficial than non-disclosure. The study also examined the influence of pre-study characteristics on in-lab and follow-up outcomes, with the hypothesis being that participants doing less well initially (i.e., higher on psychological distress, Type D personality, emotional suppression, and lower on mindfulness, cognitive reappraisal, relationship satisfaction, and perceived social support) would experience relatively more benefits from participation than those initially doing well. In addition, the study investigated whether type of event (unexpected and sudden vs. planned and more gradual) would differentially influence measures throughout the study, with the hypothesis being that couples who experienced a sudden event (MI) would be more distressed and therefore benefit more from participation than those who went through a planned procedure. Hypotheses were partially supported. Although the manipulation of disclosing to one’s partner vs. a therapist did not elicit many differences, one important and novel finding emerged regarding the orientation of disclosures: partner-disclosures yielded a more communal orientation whereas therapist-disclosures yielded a more self-focused orientation. The importance of patients’ disclosure orientation (me vs. we) was revealed when it emerged that greater communal focus led to better outcomes for both partners, but greater self-focus led to less positive outcomes for spouses. Compared to non-disclosure, disclosure generally was found to provide greater benefits for relational communication as well as marital satisfaction at follow-up. Consistent with predictions, participants who seemed most in need at pre-study (i.e., greater distress, Type D personality, emotional suppression, and less marital satisfaction and perceived support) experienced better outcomes than those who were initially well. Finally, couples who went through a sudden event were found to be more in need and benefited more than those whose event was planned, and this was especially pronounced in the effects on the spouses. Directions for future research and implications for clinical practice were discussed. For example, in addition to highlighting the value of emotional disclosure in the context of serious illness, the findings identified characteristics of cardiac couples who may be more in need of communication interventions and drew attention to important, relatively unmet needs in the patients’ spouses.

Sharon Gaine (2014). Sharing Matters of the Heart: The Importance of Emotional Disclosure for Cardiac Patients and their Spouses. UWSpace. http://hdl.handle.net/10012/8527