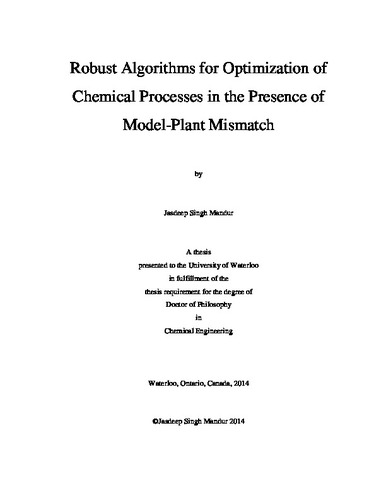 Process models are always associated with uncertainty, due to either inaccurate model structure or inaccurate identification. If left unaccounted for, these uncertainties can significantly affect the model-based decision-making. This thesis addresses the problem of model-based optimization in the presence of uncertainties, especially due to model structure error. The optimal solution from standard optimization techniques is often associated with a certain degree of uncertainty and if the model-plant mismatch is very significant, this solution may have a significant bias with respect to the actual process optimum. Accordingly, in this thesis, we developed new strategies to reduce (1) the variability in the optimal solution and (2) the bias between the predicted and the true process optima. Robust optimization is a well-established methodology where the variability in optimization objective is considered explicitly in the cost function, leading to a solution that is robust to model uncertainties. However, the reported robust formulations have few limitations especially in the context of nonlinear models. The standard technique to quantify the effect of model uncertainties is based on the linearization of underlying model that may not be valid if the noise in measurements is quite high. To address this limitation, uncertainty descriptions based on the Bayes’ Theorem are implemented in this work. Since for nonlinear models the resulting Bayesian uncertainty may have a non-standard form with no analytical solution, the propagation of this uncertainty onto the optimum may become computationally challenging using conventional Monte Carlo techniques. To this end, an approach based on Polynomial Chaos expansions is developed. It is shown in a simulated case study that this approach resulted in drastic reductions in the computational time when compared to a standard Monte Carlo sampling technique. The key advantage of PC expansions is that they provide analytical expressions for statistical moments even if the uncertainty in variables is non-standard. These expansions were also used to speed up the calculation of likelihood function within the Bayesian framework. Here, a methodology based on Multi-Resolution analysis is proposed to formulate the PC based approximated model with higher accuracy over the parameter space that is most likely based on the given measurements. For the second objective, i.e. reducing the bias between the predicted and true process optima, an iterative optimization algorithm is developed which progressively corrects the model for structural error as the algorithm proceeds towards the true process optimum. The standard technique is to calibrate the model at some initial operating conditions and, then, use this model to search for an optimal solution. Since the identification and optimization objectives are solved independently, when there is a mismatch between the process and the model, the parameter estimates cannot satisfy these two objectives simultaneously. To this end, in the proposed methodology, corrections are added to the model in such a way that the updated parameter estimates reduce the conflict between the identification and optimization objectives. Unlike the standard estimation technique that minimizes only the prediction error at a given set of operating conditions, the proposed algorithm also includes the differences between the predicted and measured gradients of the optimization objective and/or constraints in the estimation. In the initial version of the algorithm, the proposed correction is based on the linearization of model outputs. Then, in the second part, the correction is extended by using a quadratic approximation of the model, which, for the given case study, resulted in much faster convergence as compared to the earlier version. Finally, the methodologies mentioned above were combined to formulate a robust iterative optimization strategy that converges to the true process optimum with minimum variability in the search path. One of the major findings of this thesis is that the robust optimal solutions based on the Bayesian parametric uncertainty are much less conservative than their counterparts based on normally distributed parameters.