The influence of emotion and observer characteristics on attention 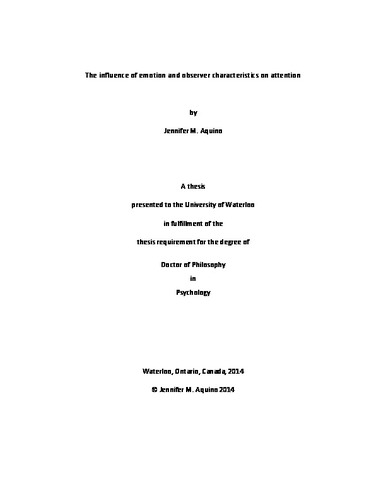 For decades, emotion researchers have debated a series of issues related to the influence of emotionally laden information on the way in which people process and remember information. The present investigation was designed to experimentally test both general (Experiment 1 and 2) and person-specific (Experiment 3) influences of emotionally laden words on attention and memory using a digit-parity task in which participants were asked to make a speeded judgement about the parity of two digits flanking a to-be-ignored, centrally presented word. In Experiment 1, when a sexual, threat, school, or neutral word was presented between the digits, only the sexual words, rated high in arousal value by study participants, disrupted digit-parity performance producing longer digit-parity response times relative to all other word categories. Sexual words were also recalled more often by study participants in a surprise free recall task. Mirroring attention and memory results, an evaluation of skin conductance responses (SCRs) demonstrated that participants showed enhanced SCRs for the sexual words relative to all other word categories. Furthermore, when the sexual words were parsed into positive and negative word categories (Experiment 2), trials in which a sex-negative word was presented between the digits produced the longest digit-parity response times. Participants recalled more sex-negative words than any other word category. Importantly, participants’ taboo ratings predicted attention and memory results. Finally, when words relevant to participants’ fears were presented between the digits, digit-parity response times slowed relative to when a fear-irrelevant word was presented between the digits. Memory and skin conductance data provide converging evidence – participants recalled and produced larger skin conductance responses for fear-relevant words compared to fear irrelevant words.