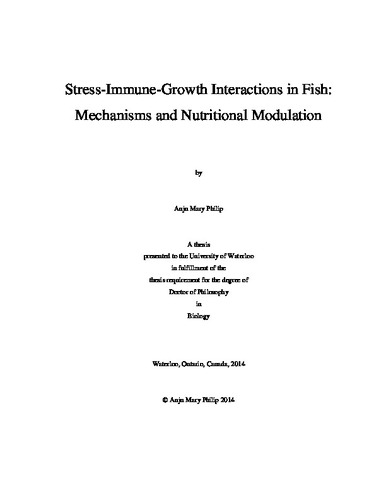 The primary adaptive organismal response to stress involves the activation of the hypothalamic-sympathetic-chromaffin cell (HSC) axis leading to rapid secretion of catecholamines, predominantly epinephrine. The hypothalamus-pituitary-interrenal (HPI) axis activation follows, leading to the secretion of cortisol in teleosts. Both these hormones play key roles in fueling the increased energy demand associated with stress. On prolonged exposure to periods of chronic stress, the stress response shifts from adaptive to maladaptive, eventually resulting in decreased disease resistance, reduced growth and an overall decline in fitness. This reduction of performance can be viewed as a consequence of the animals altered energy budget, with an increase in the metabolic requirements to cope with stress, leading to a reduction in body defense and growth potential. However, the mechanisms linking stress effects on growth and immune performance are far from clear. The suppressors of cytokine signalling (SOCS) are gaining increasing attention in mammalian models and particularly in human medicine for their ability to regulate diverse physiological functions like immunity, growth and development. Even though homologues of the SOCS genes have been identified in fishes, their functional roles are unknown. This paucity of information on the role of SOCS, combined with the knowledge that they are key regulators of energy demanding pathways in mammals, led to the hypothesis that the SOCS genes may be playing a critical role during stress to divert energy away from immune and growth processes in fishes. To test this, liver was used as a model because this tissue plays an important role in stress adaptation, immune response and growth. The ability of cortisol to modulate immune responses in the liver was investigated by exposing rainbow trout (Oncorhynchus mykiss) hepatocytes to lipopolysaccharide (LPS), a potent immunostimulant, along with cortisol and mifepristone- a glucocorticoid receptor (GR) antagonist, to tease out the role of cortisol signalling on immune function. The results showed that LPS stimulation increases the cellular stress response and metabolic capacity and induces the expression of innate response mediators in trout hepatocytes. Cortisol modulates these responses and this involves GR signalling. The results demonstrated for the first time that cortisol upregulates SOCS-1 and SOCS-2 mRNA abundance in trout liver, leading to the proposal that these proteins may be involved in stress/cortisol-mediated immune suppression. The SOCS are also potentially involved in energy–reallocations associated with nutritional restriction. To test this, immune responses and SOCS regulation in response to LPS challenge were investigated between two salmonids exhibiting different life-strategies, the anadromous Arctic charr (Salvelinus alpinus), which undergo natural long-term fasting, and the rainbow trout, that do not naturally fast. Arctic charr and rainbow trout were fed or fasted for 85 and 118 d, respectively, and injected with LPS to examine their ability to evoke an immune response despite their negative energy balance. While fasting did not alter stress parameters like plasma cortisol and glucose levels in the Arctic charr, nutrient restriction modified plasma glucose and lactate levels and liver glycogen content in rainbow trout. Additionally the fasted charr showed lower cytokine responses to LPS than the fed charr, while there was no difference in the degree of cytokine responses between the fed and fasted rainbow trout. Fasting also upregulated SOCS isoforms in the Arctic charr, but reduced SOCS-1 expression in rainbow trout. LPS upregulated SOCS-3 in the Arctic charr, but downregulated SOCS-2 levels in rainbow trout. Together, these results suggest differences in the stress, cytokine and SOCS responses to fasting and LPS stimulation between these two salmonid species. Specifically, SOCS upregulation by fasting in charr may be adaptive to restrict energy demanding pathways, including inflammatory response and growth, to cope with the negative energy balance during overwintering. To assess if SOCS are acutely regulated by stress and if this response was modulated by fasting and LPS stimulation, trout were fed or fasted for 118 d and then injected with LPS, and 72 h later subjected to a handling disturbance. Prior fasting and LPS stimulation altered the acute stressor-mediated changes in plasma cortisol, glucose and lactate levels and liver glycogen content and GR expression in trout. Acute stress also modulated liver SOCS-2 and SOCS-3 mRNA levels in rainbow trout. Overall the results suggest that liver SOCS-2 upregulation by acute stress may be playing a role in the metabolic adjustments essential to cope with stress in fishes. Finally, a series of in vitro studies to identify possible mechanisms involved in SOCS mediated immune and growth suppression were carried out. The objective was to examine whether upregulation of SOCS genes, a key negative regulator of JAK/STAT signalling by cortisol, is a key molecular link in the suppression of growth and immune responses during stress in fish. Cortisol exposure suppressed growth hormone (GH)-stimulated insulin like growth factor (IGF-1) expression and this involved reduced STAT5 phosphorylation/ activation and decreased total JAK2 protein levels. Cortisol also suppressed LPS-induced IL-6 transcript levels. While LPS reduced GH signalling, this was mediated by the downregulation of GH receptors and not due to upregulation of SOCS genes. These results highlight a novel molecular mechanism, involving SOCS upregulation by cortisol, linking stress effects on growth and immune suppression in rainbow trout. Altogether, the results for the first time highlight novel functional roles for the SOCS genes as regulators and integrators of stress-immune-growth processes, and the mode of action involves their regulation by cortisol signalling in fishes.