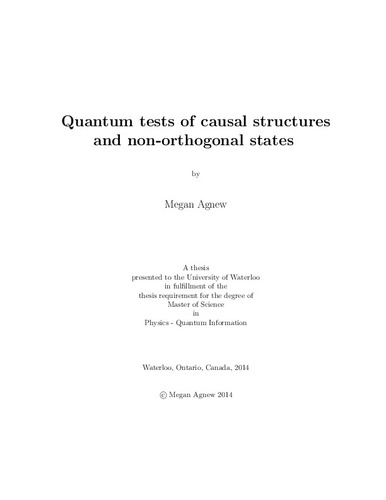 This thesis details two experimental tests that can be applied to particular quantum states to reveal important information. We begin by discussing the relevant background in quantum information. We introduce qubits and qudits as basic quantum states, and we discuss the evolution and measurement of quantum states. We then discuss quantum state tomography as a means by which to obtain complete information about a state, followed by a discussion of state discrimination as a means by which to determine the state given the promise that it is drawn from some known set. We then discuss relevant experimental techniques in quantum optics, including measurement, generation of entanglement, and generation of single photons from entanglement. The first experiment we discuss deals with the causal structure of a system, which is the description of the origin of correlations between two or more states. The causal structure can be direct-cause, meaning that one state causes the other; common-cause, meaning that both states are caused by another; or hybrid-cause, which is a combination of the two. We perform the first implementation of a new type of tomography to determine the causal structure; this is called causal tomography and functions regardless of whether two qubits are related by a common state, a process, or some combination thereof. We implement a process on two entangled photons so that we can select the exact causal structure that results, which ranges continuously between direct-cause and common-cause structures. Using causal tomography, we recover causal structures that closely match expected results and demonstrate that quantum mechanics provides an advantage in causal inference. The second experiment we discuss deals with the unambiguous discrimination of multiple quantum states. For the first time, we apply the principles of unambiguous state discrimination to high-dimensional systems. Given a state chosen randomly out of d possible states encoded in d dimensions, we implement a procedure for determining which state was chosen; this procedure in theory functions without error. We encode and detect the states in the orbital angular momentum degree of freedom up to dimension d=14. Although no experiment can provide perfectly error-free measurement due to inevitable imperfections, we obtain an error rate below the theoretical error rate of minimum-error state discrimination for dimensions up to d=12. At the time of submission of this thesis, this work has been accepted for publication in Physical Review Letters.