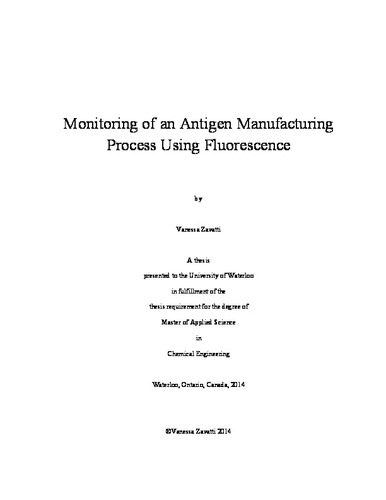 Bordetella pertussis is one of two Gram-negative bacteria responsible for causing whooping cough in humans, a highly contagious disease that infects the human upper respiratory tract. Whole-cell and acellular vaccines have been developed but due to side-effects resulting from whole-cell vaccines, acellular vaccines are currently preferred to prevent this disease. A second bacterium known to cause whooping cough is Bordetella parapertussis, but since it causes less aggressive symptoms, only B. pertussis is utilized in the manufacture of the vaccine. One acellular vaccine is based on four virulence factors: pertussis toxin (PT), filamentous hemagglutinin (FHA), pertactin (PRN), and fimbriae (FIM). The focus of this thesis was to explore the use of spectrofluorometry for monitoring and forecasting the performance of the upstream and downstream operations in the PRN purification process at Sanofi Pasteur. The upstream fermentation process includes a series of reactors of increasing volume where the microorganism is grown under controlled conditions. The PRN purification process involves a series of sequential steps for separating this protein from other proteins for later use in the vaccine. The PRN is precipitated in three steps with ammonium sulphate at three different concentrations. The pellet is collected by centrifugation and dissolved in a buffer solution followed by chromatographic separation. The run-through is then ultra-filtered and diafiltered in two separate steps. The resulting concentrate is dissolved in water and subjected to another chromatographic step and diafiltration. The final filtration of PRN involves a pre-filtration and sterile filtration. Finally, the samples are collected for quality control. The objective of this work was to monitor the process at different steps of the upstream and downstream purification process by multi-wavelength fluorescence spectroscopy in combination with multi-variate statistical methods. From the spectra, it was possible to identify fluorescent compounds, such as amino acids and enzyme cofactors, without performing an additional pre-treatment or purification step. Also, the identification of conformational changes in proteins and formation of complexes, such as NAD(P)-enzyme complex, was possible based on the shift in the emission peaks of the compounds identified. These results demonstrated the feasibility of using this tool for qualitative evaluation of the process. Multivariate methods, such as PCA and PLS, were used to extract relevant information and compress the fluorescence data acquired. PCA was effective for correlating variability in the yield of pertactin to a particular fluorescence fingerprint. As a result of the study, it was concluded that a possible source of variability in the productivity that is observed might be a metabolic shift during the fermentation steps that leads to the accumulation of NAD(P)H (or NAD(P)H-enzyme complex) probably due to oxygen transfer limitations. This conclusion was reached after investigating changes in the dissolved oxygen, aeration, agitation, supplementation time and key metabolites (lactate, glucose, glutamine) profiles. The correlation of these parameters with low productivity it was not straightforward; however, some consistencies were observed, for example, high levels of glutamine in batches with low productivity. This fact might be related to the start of the supplementation time, which may be related to the dissolved oxygen, since the addition of the supplement is done manually when an increase of the dissolved oxygen is detected. It is believed that this factor is related to the low production of protein product, such as pertactin. By means of PLS, it was possible to build regression models that allow for predicting the final concentration of pertactin from the fluorescence measurements. The models were built using the new variables obtained from data compression performed with PCA, and the final pertactin concentration measured by a Kjeldahl test. With this method, two regressions were constructed: (i) between NAD(P)H-enzyme complex spectra from the fermenters and pertactin concentration and (ii) between the pertactin fluorescence spectra from the last step of purification and pertactin concentration. A third model was built using the protein content, the NAD(P)H-enzyme complex content in the fermenters and pertactin concentration. Attempts were made to identify the possible enzyme that may bind to NAD(P)H, assumed to be a dehydrogenase. Substrates for different enzymes were employed with the objective of measuring changes in the fluorescence of the characteristic peak for this binding (Ex/Em=280/460 nm). Major changes were detected after addition of the substrates oxaloacetate, ubiquinone and succinate dehydrogenase. Since changes were detected with more than one substrate, it was not possible to unequivocally identify the enzyme; however, the results provide some insight into what may be happening at the metabolic level. The work carried out in this thesis involved both analysis of samples provided or collected by the industrial sponsor as well as analysis of samples prepared at the University of Waterloo for measurement, interpretation and calibration. The proposed fluorescence-based method was found suitable for assessing protein quantity as well as for providing an indication of possible protein aggregation and conformational changes. Future work will be required to identify the exact source of variability in the production of pertactin, by means of monitoring the evolution of fermentation, NAD(P)H and ATP measurements, and oxidation redox potential assays.