Understanding repeated actions: Examining factors beyond anxiety in the persistence of compulsions 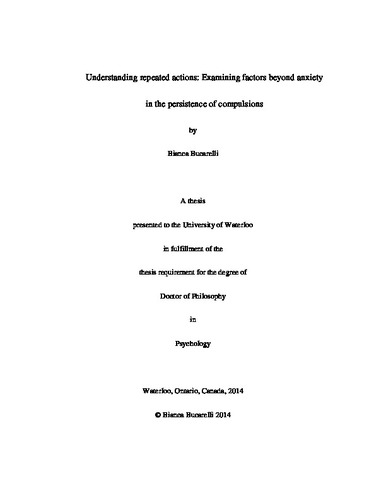 Two decades of research on obsessive-compulsive disorder (OCD) has helped us develop a strong understanding of why obsessions are often followed by the performance of a compulsive act. What we have understood less well is why that act is repeated, even though it often results in an increase, rather than decrease, in discomfort. Emergent research on compulsive checking implicates a number of beliefs—including perceived responsibility, perceived harm, need for certainty, and beliefs about one’s memory— that may influence behavioural parameters (e.g., check duration) of checking episodes. Furthermore, it has also been suggested that the act of compulsive checking may recur in part because of a self-perpetuating mechanism in which checking has paradoxical effects on these beliefs. Finally, some researchers have proposed that attentional focus (e.g., focus on threat) during checking may be related these paradoxical outcomes. At present, these ideas are mostly speculative, in part because there have been so few detailed studies of the actual phenomenology of compulsive rituals. The purpose of the present research was to gather phenomenological data on compulsions as performed by a clinical sample under ecologically valid conditions. Study 1 extended emergent research suggesting that compulsions may persist because the act of checking has a number of ironic effects on beliefs. Individuals with a diagnosis of obsessive-compulsive disorder (OCD) and anxious controls (AC) completed a naturalistic stove task in our laboratory kitchen. Participants were fitted with portable eyetracking equipment and left on their own to boil a kettle, turn the stove off, and check to ensure that the stove is safe before leaving the kitchen. Surrounding the stove were household items that are “threatening” (e.g., matches) or “non-threatening” (e.g., mugs). Ratings of mood, responsibility, harm (severity, probability) and memory confidence were taken pre- and post-task and a portable eyetracker was used to monitor attention throughout the stove task. We examined the relations between behavioural indices (check duration, attentional focus) and pre- and post-task ratings of responsibility, perceived harm, mood, and memory confidence. Although we found that OCD (as compared to AC) participants took significantly longer to leave the kitchen after using the stove, we found no evidence that stronger pre-task ratings of responsibility, perceived harm, or memory confidence were associated with longer check duration. However, we found some evidence of an ironic effect whereby greater check duration was associated with greater perceived harm and decreased certainty about having properly ensured the stove was off. Of note, these ironic effects were not unique to participants with OCD, but were also observed in the AC group. With respect to the eyetracking data, we found minimal evidence linking threat fixations and beliefs in participants with OCD. In contrast, a number of interesting relations emerged in the eyetracking data of our anxious control participants. For AC participants, a greater proportion of time spent looking at the stove was associated with greater post-task sense of responsibility for preventing harm, greater post-task harm estimates, decreased certainty (about having ensured the stove was off), and decreased confidence in memory for the task. In Study 2, individuals with a diagnosis of OCD completed a structured diary of their compulsions as they occurred naturally over a three˗day period. Participants recorded the circumstances leading to each compulsion and reported on the acts involved in the compulsive ritual, the duration and repetitiveness of the ritual, and the criteria used to determine completeness of the ritual. The findings of this study suggest that unsuccessful compulsions (i.e., compulsions in which certainty was not achieved) were associated with a longer duration (trend), more repetitions, a higher standard of evidence, and offered little in the way of distress reduction. These findings are discussed within the theoretical context of cognitive˗behavioural model of obsessive˗compulsive disorder and clinical implications are offered.