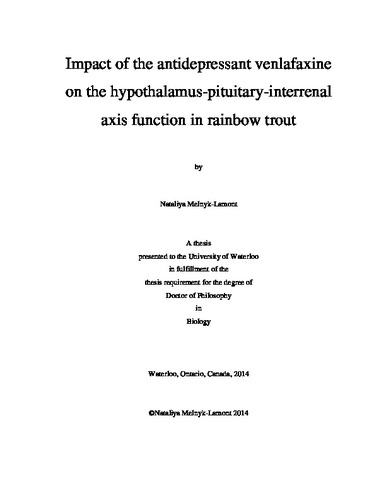 Over the recent years, venlafaxine has become the predominant antidepressant drug detected in municipal wastewater effluents (MWWE) and aquatic systems. However, very little is known about the effect of this drug in the aquatic environment on non-target organisms, including fish. Venlafaxine is a pharmaceutical compound designed to inhibit serotonin and norepinephrine reuptake, thereby increasing the synaptic availability of these neurotransmitters. In teleosts, the key aspect of stress adaptation involves the activation of the hypothalamus-pituitary-interrenal (HPI) axis, leading to the production of cortisol. Given that monoamine neurotransmitters (serotonin, norepinephrine, and dopamine) are involved in the regulation of a wide range of neuroendocrine responses, including stress axis function, my primary hypothesis was that venlafaxine acts as a neuroendocrine disruptor impacting the functioning of the corticosteroid stress axis in rainbow trout (Oncorhynchus mykiss). This hypothesis was tested through a series of in vivo exposure studies, as well as in vitro experiments, using environmentally relevant levels of venlafaxine, in order to tease out potential mode of action of this drug on target tissues involved in HPI axis functioning. The results suggest that venlafaxine alters monoamine neurotransmitter levels and their turnover rates in a region-specific manner in trout brain, and that the midbrain is the prime target. The monoamine changes may be responsible for the downstream effects on neuroendocrine responses coordinated in the hypothalamus, as this region receives monoaminergic inputs from the midbrain. The functional relevance of the above finding was confirmed by showing that venlafaxine exposure disrupted the neuroendocrine responses associated with social stress and appetite regulation. Functional downstream effects of HPI axis dysfunction were further confirmed by subjecting the fish to a handling disturbance, which revealed that the highly conserved cortisol and glucose responses to stressors were disrupted by venlafaxine. Also, there were tissue-specific effects of venlafaxine exposure on metabolic capacities, including enhanced gluconeogenesis and amino acid catabolism in the liver (a key glucose producing tissue), and alterations in the glycolytic capacity and sodium potassium ATPase activity in the gill (a key glucose utilizing tissue). The results suggest that the mode of action of venlafaxine may involve disruption of each target tissue involved in the HPI axis functioning. In vitro mechanistic studies indicated that hypothalamus functioning is disrupted by venlafaxine and this may involve effects mediated by serotonergic pathways. The reduced phosphorylation of cAMP response element binding protein (CREB) suggests that venlafaxine may impact downstream signalling cascades that are CREB-dependent. The transcript changes observed with venlafaxine in the hypothalamus include changes in mRNA levels of key genes involved in appetite regulation and stress response, including corticotropin releasing factor (CRF) and neuropeptide Y (NPY). At the pituitary level, venlafaxine impaired adrenocorticotropic hormone (ACTH) production, and this involved disruption of corticotropin releasing factor-receptor type 1 (CRF-R1), which is a key sensor for CRF stimulation. At the interrenal tissue level, the responsiveness of steroidogenic cells to ACTH stimulation was altered by venlafaxine and the mode of action appears to involve pathways upstream of the intracellular cAMP production. Also, cortisol biosynthetic capacity was disrupted by venlafaxine and this was accompanied by changes in transcript abundances of steroidogenic acute regulatory protein and cytochrome P450 side chain cleavage in the interrenal tissue. Taken together, the results demonstrate for the first time that the antidepressant venlafaxine, a human pharmaceutical contaminating aquatic systems, disrupts neuroendocrine responses and affects stress, feeding and metabolic responses in rainbow trout. The mode of action may include disruptions in brain monoamine levels and pathways involved in CREB signalling, while the exact mechanism of action remains to be elucidated. Exposure of fish to this pharmaceutical drug adversely affects the highly conserved adaptive responses that are essential to cope with subsequent stressors, and may translate into reduced fitness over the long-term. The findings underscore the necessity to understand the mechanisms of action of chemicals present in MWWE, and develop and utilize effective risk management strategies aimed at minimizing discharge of pharmaceuticals into the aquatic environment.