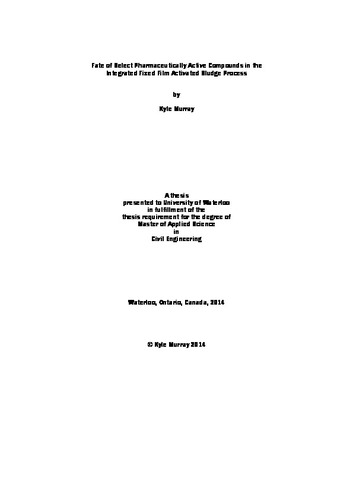 Based on a diverse consortia of research completed within the last 15 years, it has been found that Pharmaceutical Compounds (PCs) are present in detectable levels within a variety of environmental matrices, including tap water. This is largely attributed to anthropogenic activities as humans are the majority consumer of PCs. As a result, the primary method of disposal is via wastewater pathways resulting from human excretion of ingested PCs. Based on past research into PC fate via the wastewater treatment process, only limited biotic and abiotic transformations are achieved – most PC’s are detected in the effluents of WWTP’s. This suggests that improving the removal of PCs during the wastewater treatment process provides a promising strategy for limiting the conveyance of PCs to the environment. Historically, studies regarding PC fate in WWTPs have predominantly focused on the activated sludge process. However, fixed film (biofilm) wastewater treatment technologies continue to gain popularity at full scale wastewater treatment facilities. The limited studies which investigated fixed film wastewater treatment processes have reported that improved transformation efficiencies were observed relative to activated sludge systems. Based on these previous studies, it was postulated that the more diverse bacterial consortium present within the Integrated Fixed Film Activated Sludge (IFAS) process, a novel treatment process which has recently gained popularity in North America, may lead to improved transformation efficiencies (“removals”) of these very complex compounds. Only one previous study which investigated the transformation efficiencies of the IFAS process compared to a control was found. It was therefore considered that an additional investigation into the IFAS process warrants further investigation. Four IFAS Sequencing Batch Biofilm Reactors (SBBRs) and four control Sequencing Batch Reactors (SBRs) were operated with varied experimental conditions in a 22 factorial design to investigate whether an observable difference in the level of PC transformations would result via the IFAS process when compared to a control. Experimental conditions were characterized by varying the operating Solids Retention Time (SRT) and mixed liquor temperature. For all other operational parameters, best efforts were made to ensure both reactors were operated under equivalent conditions. This permitted a true assessment of the effects of the inclusion of IFAS media. Reactors were investigated through three phases of sampling, under which the performance of the reactors was investigated through the measurement of the following parameters: • Conventional parameters (tCOD, sCOD, TAN, NO3-N) within the initial and final samples; • Operational parameters (MLSS, MLVSS, ESS); and • The transformation efficiencies achieved for 5 PC (Carbamazepine, Sulfamethoxazole, Trimethoprim, Atenolol and Acetaminophen). During all three phases of PC sampling, the pilot reactors were found to have been performing as anticipated with respect to conventional contaminant removals. Organic removals were found to be statistically similar between the IFAS and control reactors across all four experimental conditions. Full nitrification was observed for all reactors with the exception of the control SBR operated under the low SRT, low temperature condition. The IFAS SBBRs were found to demonstrate improved nitrification kinetics when compared to their respective controls operated under the same experimental conditions. This was believed to be related to the more diverse bacterial consortia present as a result of the IFAS biofilms. All reactors were generally believed to be operating at steady state and were within an acceptable range of the target operating conditions. Due to complications associated with the analysis of samples, only CBZ, TRIM, ATEN and ACE could be successfully quantitated. CBZ was found to not have been transformed to any appreciable level across all conditions investigated through either the IFAS SBBRs or control SBRs. ACE was transformed at efficiencies greater than 99% under all conditions and in both IFAS and control reactors and therefore no comparison could be made. TRIM and ATEN demonstrated improved transformation efficiencies under all conditions within the IFAS reactors. The presence of IFAS media, SRT and temperature were all found to be statistically significant effects through ANOVA using a confidence limit of 95%.