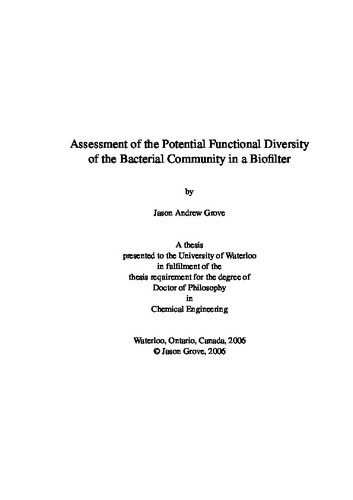 A biofilter removes biodegradable contaminants from air by passing it through a biologically-active packed bed. The microorganism community is of fundamental interest but has been the focus of few studies. This work is an investigation of the bacterial community based on the potential functional diversity of the community. <br /><br /> A number of experiments were performed in laboratory-scale biofilters using ethanol as a model contaminant. All biofilters were able to remove the ethanol with elimination capacities in the range 80 to 200gVOCm<sup>-3</sup>h<sup>-1</sup>; these values are comparable with published literature. Natural organic media (peat or compost) was used as packing. <br /><br /> The potential functional diversity of the community was assessed by Community-Level Physiological Profiling (CLPP) using sole-Carbon Source Utilisation Profile (CSUP). Community samples were used to inoculate Biolog EcoPlates<sup>TM</sup>: microplates containing a selection of 31 different carbon-substrates and an indicator dye responding to bacterial growth. This technique was found to be sensitive to changes in the community structure over time and location. <br /><br /> Results showed that the community in samples taken close together (over a scale of a few centimetres) are similar and that relatively small media samples (0. 5 to 1 g) provide reproducible information. A study of a single biofilter indicated stratification of the community occurring with the community near the inlet diverging from that near the middle and outlet of the unit; this is attributed to the ethanol being degraded in the upper part of the column and the lower part of the column not being subjected to ethanol loading. In a study of two units at a higher loading rate, stratification was not observed over a period of weeks; it is suggested that the stratification may develop over this timescale as a result of the presence or absence of the Volatile Organic Compound (VOC) and not due to differences in concentration. <br /><br /> An acclimation period of 7 to 10 days was observed before near-complete removal of ethanol was attained. Monitoring of the community suggested a subsequent shift in diversity. It is suggested that the initial acclimation period is due to biofilm formation and the subsequent shift in community diversity is due to re-organisation of the community as species specialise. In a portion of the biofilter with minimal ethanol exposure, a sudden shift in community is observed after a period of some weeks. This may reflect changes as a result of starvation and indicates that periods of shut-down (when the biofilter is not loaded) may affect the community. <br /><br /> Two studies of biofilters operating in parallel were carried out. The first provided evidence of a divergence in the communities over a period of two weeks. In the second, communities in the two units underwent changes over time but observations from both units at any one time were similar. This demonstrates that biofilters set-up and operated in a similar manner may maintain similar communities but that this is not necessarily the case. This has implications for the reproducibility of laboratory experiments and for the variation of community structure with horizontal position in industrial units.

Jason Andrew Grove (2006). Assessment of the Potential Functional Diversity of the Bacterial Community in a Biofilter. UWSpace. http://hdl.handle.net/10012/850