An evaluation of moisture dynamics and productivity of Sphagnum and Tomenthypnum mosses in western boreal peatlands, Canada 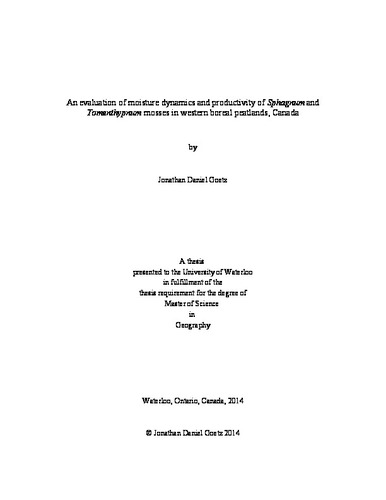 Western boreal peatlands have diverse ground covers of Sphagnum and brown mosses that have important hydrological controls on peatland-atmosphere interactions. Since peatland mosses are non-vascular, their shoot structural morphologies and community growth forms affect the storage and fluxes of water that are critical for maintaining productivity and evaporative functions. While many of the mechanisms of capillary rise are fairly well understood for Sphagnum mosses, there is less information on the water dynamics in communities of Tomenthypnum nitens, a dominant brown moss species in northern rich fens. This study investigated how the different hydrophysical characteristics of moss and peat profiles of T. nitens from a rich fen and intermixed Sphagnum angustifolium and Sphagnum magellanicum, from a poor fen affect capillary flow and water retention to support evaporation and productivity; and how different groundwater and atmospheric sources of water affected these processes. Laboratory investigations indicated volumetric water content and gross ecosystem productivity decrease with water table depth for both mosses without the advent of precipitation, with Sphagnum capitula retaining 10-20% more water than T. nitens due to its moss structure and pore connectivity with the water table. Consequently, Sphagnum capillary rise was sufficient to sustain both high pore-water pressures for evaporation and high water content for productivity at all water table depths due to a gradual shift in average water-retaining pore sizes with depth. The structure of T. nitens moss turfs, consisting of live shoots and a basal layer of old, partially decomposed shoots sometimes overlying well-decomposed peat makes capillary rise more difficult, requiring extremely low matric pressures at the surface, sometimes causing desiccation of the uppermost portions of moss shoots, and hence reduced productivity. Additional nocturnal sources of atmospheric water from dew, distillation, and vapour fluxes provide small, but potentially critical sources of water to rewet desiccated moss shoots for early morning productivity for both T. nitens and Sphagnum mosses. Investigations in the field, however, indicated that with frequent precipitation to rewet the moss and the turf base to refill large pores, evaporative demands at the T. nitens moss canopy could drive capillary flow from the water table to maintain adequate θ for productivity. T. nitens mosses also can grow in turfs disconnected from the underlying iii peat, so that the basal layer temporarily retains water from precipitation for capillary rise. Thus, while capillary connection of the T. nitens moss turf with the underlying peat and water table is not critical to maintain productivity, it grows in a relatively large range of elevations from the water table, compared to Sphagnum and feather mosses. Rewetting of the capitula and the raising of the water table by precipitation provided higher water matric pressures within the moss matrix, and along with high evaporative demands, provided the mechanisms for sufficient capillary flow for productivity. Thus, Sphagnum could grow in habitats far from the water table like feather mosses, although the latter did not require capillary rise for productivity. Furthermore, disequilibrium between water vapour and liquid in the pores of T. nitens in the near-surface suggested pressures calculated with the Kelvin equation may not provide an accurate characterization of actual matric pressures in the moss. However, as the disequilibrium is caused by vapour pressure gradients between the moss and the atmosphere, it is likely a driving factor that helps maintain vapour and capillary water fluxes to provide moisture for T. nitens and other mosses. These results illustrate hydrological mechanisms that explain how moss growth form and habitat are linked. As such, the Sphagnum and T. nitens mosses are well adapted to maintain capillary in their poorly drained habitats in western boreal peatlands.