Calmodulin as a universal regulator of voltage gated calcium channels 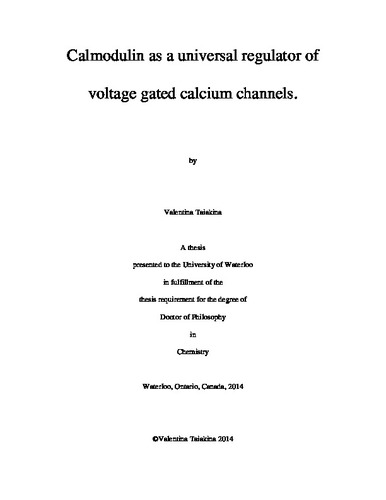 Calmodulin (CaM) is a ubiquitous calcium-binding protein responsible for the binding and activation of a vast number of enzymes and signaling pathways. It contains two lobes that bind two calcium ions each, separated by a flexible central linker. This structural flexibility allows CaM to bind and regulate a large number of diverse protein targets within the cell in response to Ca2+ gradients. Voltage gated calcium channels (CaVs), as main sources of extracellular Ca2+, are crucial for a number of physiological processes, from muscle contraction to neurotransmission and endocrine function. These large transmembrane proteins open in response to membrane depolarization and allow gated entry of Ca2+ ions into the cytoplasm. Their regulation is currently the subject of intense investigation due to its pharmacological and scientific importance. CaM has been previously shown to pre-associate and act as a potent inhibitor of one class of high-voltage activated (HVA) channels called L-type channels via its interaction with their C-terminal cytoplasmic region. This interaction is primarily mediated by a conserved CaM-binding motif called the ‘IQ’ motif (for conserved isoleucine and glutamine residues), although the exact molecular details of its involvement in inactivation are currently unclear. Elucidation of these details was the primary objective of this dissertation. Recently, a novel sequence motif within this channel called ‘NSCaTE’ (N-terminal spatial calcium transforming element) has been described as an important contributor to calcium-dependent inactivation (CDI) of L-type channels. It was presumed to be unique to vertebrates, but we also show its conservation in a distantly related L-type channel homolog of Lymnaea stagnalis (pond snail). The interaction of CaM with a number of peptides representing the different regulatory motifs (IQ and NSCaTE) for both mammalian and snail isoforms was characterized in an attempt to better understand their role in CDI. Biophysical work with peptides as well as electrophysiology recordings with an N-terminal truncation mutant of Lymnaea CaV1 homolog were performed to expand our understanding of how the interplay between these channel elements might occur. In brief, the most striking feature of the interaction concerns the strong evidence for a CaM-mediated bridge between the N- and C-terminal elements of L-type channels. Further investigation of the CaM interaction with both IQ and NSCaTE peptides using Ca2+-deficient CaM mutants reveals a preference of both peptides for the Ca2+-C-lobe of CaM, and a much higher affinity of CaM for the IQ peptide, suggesting that the N-lobe of CaM is the main interaction responsible for the physiological effects of NSCaTE. These results are consistent with our electrophysiology findings that reveal a distinct buffer-sensitive CDI in wild type LCaV1 that can be abolished by the N-terminal truncation spanning the NSCaTE region. In addition to L-type channels, CaM has also been shown to have an indirect role in the regulation of low-voltage activated (LVA) or T-type channels (CaV3.x), via their phosphorylation by CaM-dependent protein kinase II (CaMKII). Using a primary sequence scanning algorithm, a CaM-binding site was predicted in a cytoplasmic region of these channels that was also previously shown to be important in channel gating. Biophysical experiments with synthetic peptides spanning this gating brake region from the three human and the single Lymnaea isoform strongly suggest that there is a novel, bona fide CaM interaction in this channel region, and also hint that this interaction may be a Ca2+-dependent switch of some sort. The results confirm a possible new role for CaM in the direct regulation of these channels, although the exact mechanism remains to be elucidated.