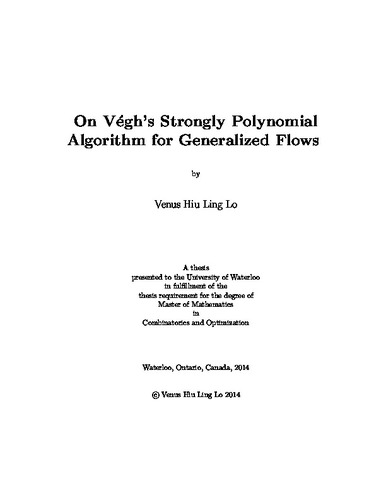 This thesis contains an exposition of the new strongly polynomial algorithm for the generalized flow problem by Laszlo Vegh (2013). It has been a long-standing open question whether such an algorithm exists, until it was resolved by Vegh in 2013. Generalized flows have many applications in economic problems, such as transportation of goods and foreign currency exchange. The main presentation follows Vegh's paper, but this exposition contains some simplifications and differences in the algorithm and its analysis. The main difference is that we consider the running time of the strongly polynomial algorithm up to one arc contraction before starting fresh on a smaller network. This increases the running time of the algorithm slightly, but the analysis becomes easier.