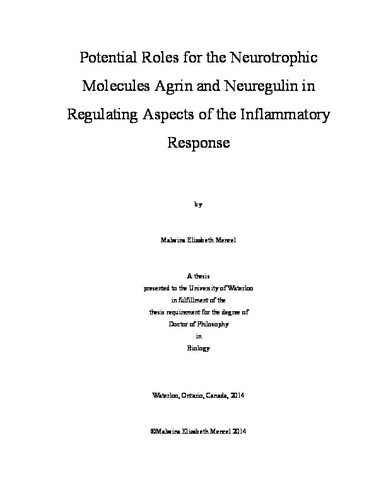 Agrin and neuregulin are neurotrophic molecules well known for their roles at synapses in the peripheral and central nervous systems. The expression of these two molecules is not restricted to these sites however, as they are broadly expressed across multiple organ systems. What roles do agrin and neuregulin play within these alternate systems; what is the function of these molecules outside the nervous system? Here I investigate potential roles for agrin and neuregulin in inflammation. Inflammation is an immediate response by innate immune cells, primarily macrophages, to infection and is characterized by the synthesis of pro-inflammatory mediators. The innate immune system possesses multiple redundant mechanisms to locally control inflammation. The neuro-immune axis is one means of control. Often called the cholinergic anti-inflammatory pathway, it acts to regulate local inflammation via nerve-secreted acetylcholine signaling through the homopentameric α7 nicotinic acetylcholine receptors (α7nAChR) present on macrophages. Both agrin and neuregulin have been independently described to share an intricate relationship with acetylcholine receptors (AChR) in the nervous system. Agrin is best known for its role in AChR aggregation at the neuromuscular junction while neuregulin has related roles in AChR transcription, cell survival, communication and differentiation. Based on the common characteristics of synapses in the nervous and immune systems we were curious to see if agrin and neuregulin played analogous roles on macrophages. Here we show that agrin and its receptor dystroglycan are expressed on RAW264.7 macrophages. In addition, agrin treated macrophages demonstrate increased endogenous agrin and α7nAChR expression. By blocking α-dystroglycan (α-DG), a receptor for agrin, with an anti-α-DG antibody we further saw a reduction in agrin expression. We also show that agrin is able to aggregate surface α7nAChRs and transmembrane agrin co-localizes with α7nAChRs therein. Agrin appears to induce approximately a 15-fold increase in anti-inflammatory cytokine IL-10 in macrophages but does not increase pro-inflammatory cytokine TNF-α or IL-6 synthesis. Agrin-treated macrophages challenged with LPS, a potent activator of inflammation, exhibit a 57% decrease in IL-6. Macrophages treated with agrin also exhibit a 4-fold increase in STAT3, a regulator of anti-inflammatory action. The potential anti-inflammatory effects of agrin in the periphery parallel previous work describing the effects of neuregulin in the brain. Previous work completed by our lab suggests a role for neuregulin in augmenting the expression of α7nAChRs on microglia, the macrophages of the brain, but not in peripheral macrophages. Here we show that treatment of LPS challenged microglia with neuregulin produces an 88% decrease in IL-6 and a 33% decrease in TNF-α. These results indicate both agrin and neuregulin are able to induce an increase in α7nAChRs and augment the synthesis of pro- and anti-inflammatory cytokines in their respective systems. These results also further the support the evidence of neuro-immune crosstalk in the immune system. Taken together these results present two novel players in inflammatory regulation by macrophages in the periphery and CNS.

Malwina Mencel (2014). Potential Roles for the Neurotrophic Molecules Agrin and Neuregulin in Regulating Aspects of the Inflammatory Response. UWSpace. http://hdl.handle.net/10012/8490