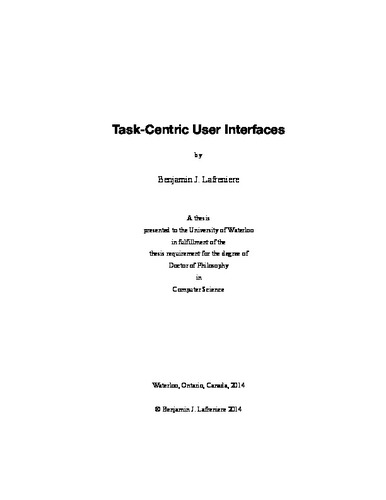 Software applications for design and creation typically contain hundreds or thousands of commands, which collectively give users enormous expressive power. Unfortunately, rich feature sets also take a toll on usability. Current interfaces to feature-rich software address this dilemma by adopting menus, toolbars, and other hierarchical schemes to organize functionality—approaches that enable efficient navigation to specific commands and features, but do little to reveal how to perform unfamiliar tasks. We present an alternative task-centric user interface design that explicitly supports users in performing unfamiliar tasks. A task-centric interface is able to quickly adapt itself to the user’s intended goal, presenting relevant functionality and required procedures in task-specific customized interfaces. To achieve this, task-centric interfaces (1) represent tasks as first-class objects in the interface; (2) allow the user to declare their intended goal (or infer it from the user’s actions); (3) restructure the interface to provide step-by-step scaffolding for the current goal; and (4) provide additional knowledge and guidance within the application’s interface. Our inspiration for task-centric interfaces comes from a study we conducted, which revealed that a valid use case for feature-rich software is to perform short, targeted tasks that use a small fraction of the application’s full functionality. Task-centric interfaces provide explicit support for this use. We developed and tested our task-centric interface approach by creating AdaptableGIMP, a modified version of the GIMP image editor, and Workflows, an iteration on AdaptableGIMP’s design based on insights from a semi-structured interview study and a think-aloud study. Based on a two-session study of Workflows, we show that task-centric interfaces can successfully support a guided-and-constrained problem solving strategy for performing unfamiliar tasks, which enables faster task completion and reduced cognitive load as compared to current practices. We also provide evidence that task-centric interfaces can enable a higher-level form of application learning, in which the user associates tasks with relevant keywords, as opposed to low-level commands and procedures. This keyword learning has potential benefits for memorability, because the keywords themselves are descriptive of the task being learned, and scalability, because a few keywords can map to an arbitrarily complex set of commands and procedures. Finally, our findings suggest a range of different ways that the idea of task-centric interfaces could be further developed.