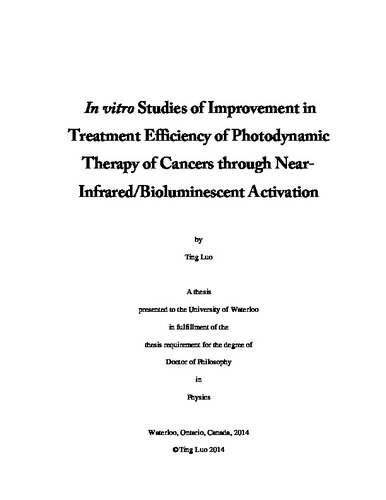 Cancer is a leading cause of death that affects millions of people across the globe each year. Photodynamic therapy (PDT) is a relatively new treatment approach for cancer in which anticancer drugs are activated by light at an appropriate wavelength to generate highly cytotoxic reactive oxygen species (ROS) and achieve tumor destruction. Compared with conventional chemo- and radiotherapy, PDT can be performed with minimal invasiveness, local targeting and reduced side effects. However, most of the currently available PDT drugs mainly absorb in the visible part of the spectrum, where light penetration depth into human tissues is very limited. Therefore, increasing the treatment depth of PDT has been considered to be an important approach to improve the effectiveness of PDT for treating larger and thicker tumor masses. In this thesis, we present our investigation into the potential of two-photon activated PDT (2-γ PDT), combination therapy of PDT and chemotherapy, and bioluminescence-activated PDT as a means to increase the treatment depth of this modality. In 2-γ PDT, the photosensitizing agents are activated through simultaneous absorption of two photons. This approach allows the use of near-infrared (NIR) light that can penetrate deeper into tissues and thus, has the potential of treating deep-seated tumors and reducing side effects, while the non-linear nature of two-photon excitation (TPE) may improve tumor targeting. We have evaluated the PDT efficacy of a second-generation photosensitizer derived from chlorophyll a, pyropheophorbide a methyl ester (MPPa), through both one- and two-photon activation. We observed that MPPa had high one-photon (1-γ PDT efficacy against both cisplatin-sensitive human cervical (HeLa) and cisplatin-resistant human lung (A549) and ovarian (NIH:OVCAR-3) cancer cells when activated by femtosecond (fs) laser pulses at 674 nm. At a low light dose of 0.06 J cm-2, the MPPa concentration required to produce a 50% cell killing effect (IC50) was determined to be 5.3 ± 0.3, 3.4 ± 0.3 and 3.6 ± 0.4 μM in HeLa, A549 and NIH:OVCAR-3 cells, respectively. More significantly, we also found that MPPa could be effectively activated at the optimal tissue-penetrating wavelength of 800 nm through TPE. At a light dose of 886 J cm-2, where no measurable photodamage was observed in the absence of MPPa, the IC50 values were measured to be 4.1 ± 0.3, 9.6 ± 1.0 and 1.6 ± 0.3 μM in HeLa, A549 and NIH:OVCAR-3 cells, respectively. We obtained corresponding LD50 (the light dose required to produce a 50% killing effect) values of 576 ± 13, 478 ± 18 and 360 ± 16 J cm-2 for 10 μM MPPa, which were approximately 3-5 times lower than the published 2-γ LD50 of Visudyne® and 20-30 times lower than that of Photofrin®. These results indicate that MPPa may serve as a photosensitizer for both 1- and 2-γ activated PDT treatment of difficult-to-treat tumors by conventional therapies. Indocyanine green (ICG), a dye having an absorption maximum near 800 nm, has been considered to be a potential NIR PDT agent. However, the PDT efficacy of ICG has been found to be very limited probably due to the low yield of cytotoxic ROS. In the present work, we have evaluated the combination effects of ICG-mediated PDT with conventional chemotherapy mediated by two types of chemotherapeutic drugs, namely the type II topoisomerase (TOPII) poisons etoposide (VP-16)/teniposide (VM-26) and the platinum-based drugs cisplatin (CDDP)/oxaliplatin (OXP). Synergistic enhancement of cytotoxicity and increased yields of DNA double strand breaks (DSBs) were observed in HeLa, A549 and NIH:OVCAR-3 cancer cells treated with the combination of ICG-PDT and VP-16. The presence of VP-16 during the laser irradiation process was found to be critical for producing a synergistic effect. An electron-transfer-based mechanism, in which ICG could increase the yield of highly cytotoxic VP-16 metabolites, was proposed for the observed synergistic effects, although direct spectroscopic detection of the reaction products was found to be very challenging. Moreover, we observed a much lower degree of synergy in the human normal fibroblast GM05757 cells than that in the three cancer cell lines investigated. Synergistic effects were also observed in A549 cells treated with the combination of ICG-PDT and VM-26 (i.e. an analog of VP-16). Furthermore, the combination of low-dose CDDP/OXP and ICG-PDT was demonstrated to produce an additive or synergistic effect in selected cancer cell lines. These preliminary results suggest that the combination of ICG-PDT with VP-16/VM-26 or CDDP/OXP chemotherapy may offer the advantages of enhancing the therapeutic effectiveness of ICG-PDT and lowering the side effects associated with the chemotherapeutic drugs. Bioluminescence, the generation of light in living organisms through chemical reactions, has been explored as an internal light source for PDT in recent years. This approach, in principle, does not suffer from the limited tissue penetration depth of light. In the present project, we have evaluated the effectiveness of luminol bioluminescence in activating the porphyrin photosensitizers meso-tetra(4-sulfonatophenyl)porphine dihydrochloride (TPPS4) and Fe(III) meso-tetra(4-sulfonatophenyl)porphine chloride (FeTPPS). The combination treatment induced significant killing of HeLa cells, while additive effects were observed in two normal human fibroblast cell lines (GM05757 and MRC-5). Our observations indicate that bioluminescence of luminol may generate sufficient light for intracellular activation of PDT sensitizers. Furthermore, the combination treatment may have intrinsic selectivity towards cancerous tissues. In summary, we have demonstrated effective killing of cancer cells by MPPa-mediated 1- and 2-γ PDT, combination of ICG-PDT and VP-16/VM-26 or CDDP/OXP chemotherapy, and bioluminescence of luminol activated PDT mediated by TPPS4/FeTPPS. These positive preliminary results indicate that all these three approaches have the potential of increasing the treatment depth of PDT and facilitating the development of more effective PDT treatment strategies.

Ting Luo (2014). In vitro Studies of Improvement in Treatment Efficiency of Photodynamic Therapy of Cancers through Near-Infrared/Bioluminescent Activation. UWSpace. http://hdl.handle.net/10012/8486