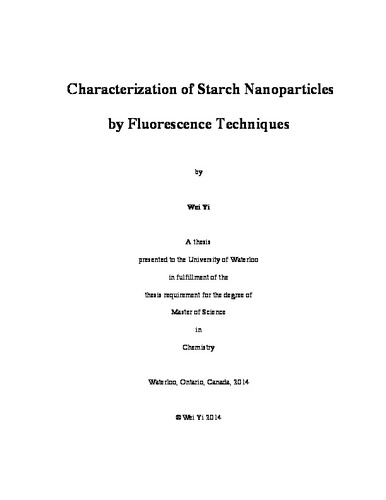 Abstract The properties of starch nanoparticles (SNPs) labeled with the fluorescent dye pyrene (Py-SNPs) were probed by using fluorescence quenching, pyrene excimer formation, and transmission electron microscopy (TEM). Pyrene labeling of the SNPs was achieved by reacting 1-pyrenebutyric acid with the hydroxyl groups of the SNPs under basic conditions and in the presence of diisopropylcarbodiimide. This procedure did not degrade the SNPs as confirmed by dynamic light scattering (DLS) and afforded a means to generate a pyrene labeling level ranging from 0.5 to 5.0 mol% of the glucose units making up the SNPs. A polymeric quencher was also synthesized to probe the accessibility of the interior of the Py-SNPs by using fluorescence quenching measurements. The polymeric quencher was a 2K poly(ethylene glycol) terminated at one end with a methyl group and a nitropropane group at the other. Unfortunately these quenching experiments were abandoned when it was found that the polymeric quencher synthesized for these experiments absorbed too strongly where pyrene absorbs. Intramolecular pyrene excimer formation in the Py-SNPs was investigated by steady-state and time-resolved fluorescence. These experiments demonstrated that the Py-SNPs contract but do not overlap like linear polymers do in the semi-dilute regime. They also showed that despite the inherent rigidity of starch, the Py-SNPs deformed in water to allow their hydrophobic pyrene labels to cluster toward the center of the SNPs to minimize pyrene-solvent contacts. This segregation of the hydrophobic pyrene labels led to a distinct core-shell structure for the Py-SNPs which was illustrated in TEM images acquired on films prepared with the Py-SNPs. In summary, this thesis has uncovered some unexpected properties of the SNPs. Their branched structure makes their interpenetration difficult in the semi-dilute regime which forces them to contract. SNPs are thus deformable and their deformation can be probed quantitatively by using fluorescence and TEM.