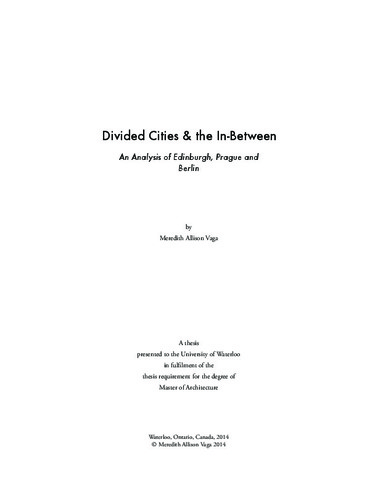 All cities set up a condition of disjunction as they are inherently manmade ‘built’ places separate from the natural wilderness they abut. The cities that emerge over time are then places held in tension between the kinetic and static forces of civilization, nature, people, ownership and infrastructure. These conflicting pieces manifest as division within the city. The division can be physically seen in specific gaps in the physical infrastructure: urban 'slips' that act as thresholds for a city by gathering and revealing the in/visible dueling qualities, and can ultimately prove to be important spaces and cultural magnets for the city. The analysis is centered on three specific 'slips' within three northern European cities: the South Bridge in Edinburgh, the Charles Bridge in Prague and the Berlin Wall. Looking from the perspective of both the physical, visible infrastructure and the unconscious, invisible cultural realm, these architectural objects are then charted through historical, literary, cartographic and urban analyses to come to an understanding of both the specific ‘characters’ or ‘spirits of place’ and the broad predisposition for division within cities.