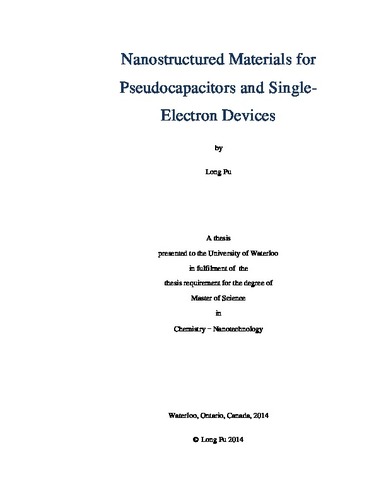 As a result of increasing demand of power in the modern society, energy storage/consumption is playing a more important role on future economics. Therefore energy storage systems which are more environmentally friendly, low-cost and high-performance have attracted much attention. Among electrochemical systems, supercapacitors are considered as a prominent candidate for the modern energy storage systems due to the high power density, high charge/discharge rate, and long lifetimes. Nevertheless, the performance of supercapacitors is limited by the significant disadvantage of low energy density. Metal oxides with high pseudocapacitance such as MnO2 are used as the electrode materials for supercapacitors to resolve the lack of energy density in supercapacitors. The specific capacitance is notably enhanced by the metal oxides because of the reversible redox reactions. Previous studies confirmed that only a thin layer of MnO2 is involved in the redox process and is electrochemically active, which makes surface area a critical factor of energy storage. To increase surface area of MnO2, ZnO nanostructure is introduced in the electrode material as a template for electrodeposition of MnO2. In the first part of the research, we synthesize a nanomaterial which combines 0-1-2 dimensional properties of different nanostructures and significantly increases the energy capacity of MnO2. iv In the second part of the research, we demonstrate an in situ synthesis of a hybrid device that combines two materials to investigate the individual characteristic of two nanomaterials. In this study, a ZnO nanorod interface on Au nanoparticle arrays is fabricated, and results in the photo-modulation of the array characteristics. We find the use of nanoparticle arrays as electrochemical systems by electrodepositing ZnO on Au nanoparticle arrays. The method expands their potential use in sensors, multifunctional materials, single electron transistors and nanoscale energy systems. Characteristic behavior of Au nanoparticle arrays including Coulomb blockade at room temperature, single electron charging effects and a power law dependence in current-voltage were observed, and Schottky behavior and photocurrent generation due to the ZnO nanorods were also proved. From the modulation of the threshold voltage of the Au array due to the electron-hole pairs generated by photo excitation in the ZnO rods, it can be seen that the system also has coupling between the Au nanoparticles and ZnO rods other than the individual characteristics. Au nanoparticles can be used as electrochemical systems with both structural and spatial confinement of the synthesized material. The possibility of using Au nanoparticle chains as electroactive sites significantly expands their potential use in sensors, multifunctional materials, single electron transistors and nanoscale energy systems.