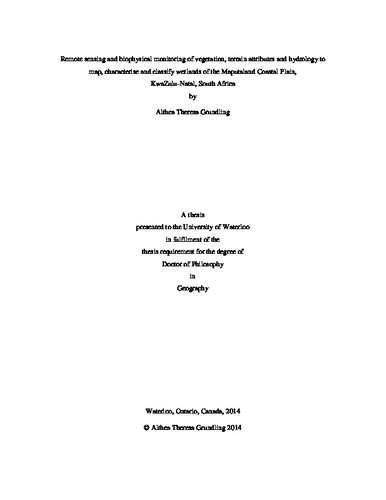 The Maputaland Coastal Plain is situated in north-eastern KwaZulu-Natal Province, South Africa. The Maputaland Coastal Plain and underlying aquifer are two separate but inter-linked entities. This area with high permeable cover sands, low relief and regional geology that slopes towards the Indian Ocean, hosts a variety of important wetlands in South Africa (e.g. 66% of the recorded peatlands). The wetlands overlie and in some cases also connect to the underlying regional water-table. The apparent distribution of wetlands varies in response to periods of water surplus or drought, and over the long-term has been reduced by resource (e.g. agriculture, forestry) and infrastructure (e.g. urbanisation) development. Accurate wetland mapping and delineation in this environment is problematic due to the ephemeral nature of wetlands and extensive land-use change. Furthermore the deep aeolian derived sandy soils often lacks soil wetness indicators in the soil profile. It is postulated that the aquifer is the source of water to rivers, springs, lakes and wetlands (and vice versa). However, the role of groundwater in the sustainability of hydro-ecological systems is unclear. Consequently this research attempted to determine spatial and temporal changes in the distribution of these wetlands, their susceptibility to human development, understand the landscape processes and characterise and classify the different wetland types. An underlying assumption of the hydrogeomorphic wetland classification concept in South Africa is that wetlands belonging to the same hydrogeomorphic unit share common features in terms of environmental drivers and processes. Given the above, the objectives of this thesis relating to the north-eastern corner of the Maputaland Coastal Plain are to: 1) Map the distribution of wetlands and their relation to other land-use; 2) Characterise the landscape processes shaping the dynamics of wetland type and their distribution; 3) Classify wetlands by applying hydrogeomorphic wetland classification system. This study used Landsat TM and ETM imagery acquired for 1992 and 2008 (dry) and Landsat ETM for 2000 (wet) along with ancillary data. Wetland type characteristics were described using terrain unit position in the landscape, SRTM DEM, land surveyor elevation measurements along with long-term rainfall records, in situ water-table levels with soil analysis and geology and vegetation descriptions. A conceptual model was used to account for the available data, and output from a hydrology model was used to support the interpretation of wetland distribution and function. Wetlands in the study area include permanent wetlands (swamp forests and reed/sedge wetlands), but the majority of sedge/moist grassland wetlands are temporary systems. The wetland distribution reflects the rainfall distribution and groundwater discharge in lower lying areas. The weathering of the Kosi Bay Formation is a key factor in wetland formation. Because of an increase in clay content with depth, the pore-space and hydraulic conductivity are reduced which causes water to impede on this layer. The nature of the aquifer and regional geology that slope towards the east along with extreme rainfall events in wet and dry periods are contributing drivers of wetland and open water distribution. In 2008 (a dry year) the smaller wetland extent (7%) could primarily identify “permanent” groundwater-fed wetland systems, whereas for the wet year (2000) with larger wetland extent (18%) both “temporary” and “permanent” wetlands were indicated. Comparison between both dry years (1992 and 2008) indicates an 11% decrease in wetland (sedge/moist grassland) and a 7% increase in grassland distribution over time. Some areas that appear to be grassland in the dry years were actually temporary wetland, based on the larger wetland extent (16%) in 2000. The 2008 Landsat TM dataset classification for the entire Maputaland Coastal Plain gave an overall 80% mapping accuracy. Landscape settings identified on this coastal aquifer dominated by dune formations consist of 3 types: plain (upland and lowland), slope and valley floor. Although the wetland character is related to regional and local hydrogeology as well as climate affecting the temporal and spatial variability of the wetlands this research confirms that the patterns and wetland form and function are predominantly shaped by the hydrogeomorphic setting and not the rainfall distribution. The following wetland types were identified: permanent wetlands such as peat swamp forests, peat reed and sedge fens; temporary wetland systems such as perched depressions, and sedge/moist grasslands. The Hydrogeomorphic wetland classification system was applied using a semi-automated method that was 81% accurate. The following hydrogeomorphic units could be identified: one floodplain, i.e., Siyadla River Floodplain, channelled valley-bottoms, unchannelled valley-bottoms, depressions on modal slope values <1%, seepage wetlands on modal slope values 1-2%. However, evaluation of the hydrogeomorphic classification application results suggests that the “flat” hydrogeomorphic class be revised. It did not fit meaningfully on the upland plain area. This research finding concludes wetland function does depend on landscape setting and wetland function is not truly captured by the hydrogeomorphic type classification. Not all depression on the coastal plain function the same way and three types of depressions occurs and function differently, i.e., perched depression with no link to the regional water-table vs. depressions that are linked with the regional water-table on plain, slope and valley floor landscape settings. Overall, this research study made a useful contribution in characterising and classifying wetland type and distribution for a high priority wetland conservation area in South Africa. Applying similar methods to the broader Maputaland Coastal Plain will particularly benefit from the research findings. The importance of using imagery acquired in wet and dry periods as well as summer and winter for a more comprehensive wetland inventory of the study area, is stressed. To manage the effects of climate variability and development pressure, informed land-use planning and rehabilitation strategies are required based on landscape analysis and interpretation.