A Feature Interaction Resolution Scheme Based on Controlled Phenomena 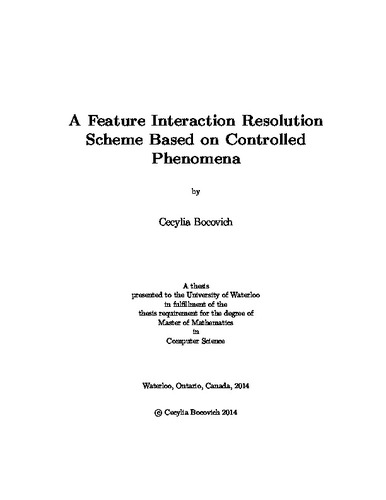 Systems that are assembled from independently developed features suffer from feature interactions, in which features affect one another's behaviour in surprising ways. To ensure that a system behaves as intended, developers need to analyze all potential interactions -- and many of the identified interactions need to be fixed and their fixes verified. The feature-interaction problem states that the number of potential interactions to be considered is exponential in the number of features in a system. Resolution strategies combat the feature-interaction problem by offering general strategies that resolve entire classes of interactions, thereby reducing the work of the developer who is charged with the task of resolving interactions. In this thesis, we focus on resolving interactions due to conflict. We present an approach, language, and implementation based on resolver modules modelled in the situation calculus in which the developer can specify an appropriate resolution for each variable under conflict. We performed a case study involving 24 automotive features, and found that the number of resolutions to be specified was much smaller than the number of possible feature interactions (6 resolutions for 24 features), that what constitutes an appropriate resolution strategy is different for different variables, and that the subset of situation calculus we used was sufficient to construct nontrivial resolution strategies for six distinct output variables.