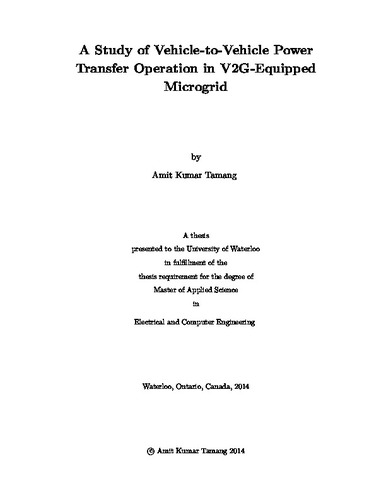 Bidirectional vehicle-to-grid (V2G) system utilizes the batteries of parked electric-drive-vehicles to provide energy storage and backup services in a power system. Such services in a V2G-equipped microgrid system can be used as an enabler of enhancing the renewable energy source (RES) penetration by storing the energy during the surplus of RES supply and supplying the energy during the lack of RES supply. In this research, we aim at enhancing the storage capacity of V2G system by introducing a novel vehicle-to-vehicle power transfer operation that runs on the top of V2G services. The vehicle-to-vehicle (V2V) operation transfers the energy from the source vehicles (which are parked for relatively longer times) to the destination vehicles (which are parked for relatively shorter times). The depleted energy of the source vehicles is fulfilled by the surplus RES supply in the future. In this way, the destination vehicles are effectively charged by RES supply, thereby enhancing the storage capacity of the V2G system. We can also say that the V2V operation would become beneficial only when there is a sufficient amount of surplus RES supply in the future. We propose a decision rule to distinguish if a vehicle should be a source vehicle or a destination vehicle during the V2V operation. The decision rule is designed based on the two factors, namely the state-of-charge of vehicle’s battery, and the remaining time of vehicle to depart. In this research, we conduct a comprehensive study to analyze the impacts of state-of-charge and mobility pattern of vehicles on different performance metrics via simulation. The results shows that in order to achieve better performance of V2V operation, the state-of-charge of vehicle’s battery should be given more priority over the remaining time of vehicle to depart. The vehicle mobility pattern with unexpected departure greatly reduced the overall performance of the V2G system.