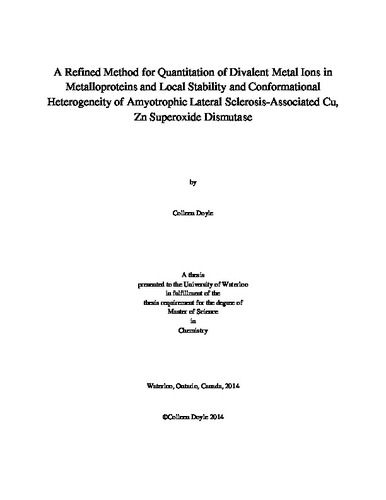 Amyotrophic lateral sclerosis (ALS) is a devastating and progressive disease that results in selective death of motor neurons in the cortex, brain stem and spinal cord. ALS is the most common adult onset motor neuron disease resulting in paralysis and death, commonly within 2 – 5 years of symptom onset, yet there remains no effective treatment for the disease. The majority of ALS cases show no hereditary link (referred to as sporadic ALS or sALS); however, ~10% of cases show a dominant pattern of inheritance (referred to as familial ALS or fALS). Over 170 different mutations in human Cu, Zn superoxide dismutase (SOD1) have been identified to account for ~20% of fALS. SOD1 is a ubiquitously expressed homodimeric antioxidant enzyme. It is widely accepted that mutations in SOD1 result in a gain of toxic function, rather than a loss of native function. A prominent hypothesis for the gain of function is the formation of protein aggregates, which have been shown to be toxic to motor neurons. Protein aggregation is observed in a number of neurodegenerative disorders, including Alzheimer’s, Huntington’s and Parkinson’s disease. Each β-rich monomer of SOD1 binds one catalytic Cu ion and one structural Zn ion. The metallation state of SOD1 significantly influences the structure, dynamics, activity, stability, and aggregation propensity. A similar trend has been observed in a number of metalloenzymes and as such a method to rapidly and accurately quantitate metal ions in proteins is of great importance. Here a review of previous methods using the chromogenic chelator PAR to quantitate metal ions in proteins is presented. Three methods are assessed for their accuracy, precision and ease of use. The methods vary in accuracy, which is highest only under the specific conditions it was designed for. A robust new method is presented here that uses spectral decomposition software to accurately resolve the absorption bands of Cu and Zn with high precision. This method may be successful as a more general method for metal analysis of proteins allowing for the quantitation of additional metal combinations (e.g. Zn/Co, Ni/Cu, Ni/Co). Thermodynamic stability has widely been implicated as playing a major role in the aggregation of globular proteins. Metal loss significantly decreases the global stability of SOD1 and as such metal-depleted (apo) forms of SOD1 have largely been the focus of SOD1 investigations. Recent studies, however, suggest that complete global unfolding is not required for protein aggregation. Local unfolding has been investigated and proposed to be sufficient to induce irreversible protein aggregation in the absence of global destabilization. Enhanced local unfolding has been observed in a number of disease-related proteins. Since SOD1 aggregation may occur from partially unfolded forms, NMR temperature dependence studies have been carried out on the most abundant form of SOD1 in vivo, the fully metallated (holo) dimer, to provide a residue specific picture of subglobal structural changes in SOD1 upon heating. Amide proton (N1H) temperature coefficients report on the hydrogen bonding status of a protein. A curved N1H temperature dependence indicates that the proton populates an alternative conformation generally within 5 kcal/mol of the ground state. NMR temperature dependence studies of pseudoWT indicate that the thermal unfolding process of holo pWT begins with “fraying” of the structure at its periphery. In particular, increased disorder is observed in edge strands β5 and β6, as well as surrounding the zinc binding site. The local stability and conformational heterogeneity of ALS-associated mutants G93A, E100G and V148I was also assessed. All mutants display similar local unfolding patterns to pseudoWT, but also show distinct differences in the hydrogen bonding network surrounding the mutation site. Interestingly, each mutation regardless of its structural context results in altered dynamics at the β-barrel plug, a key stabilizing element in SOD1. A significant proportion of residues (~30%) access alternative states in both pseudoWT and mutants, however, overall mutants appear to be able to access higher free energy alternative states compared to pseudoWT. The implications of these results for the mechanism of protein aggregation and disease are discussed.