Recycled Concrete Aggregate: Influence of Aggregate Pre-Saturation and Curing Conditions on the Hardened Properties of Concrete 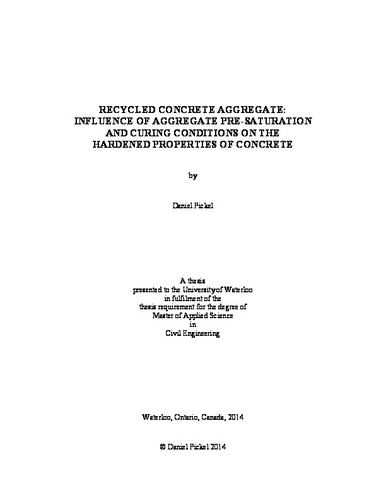 Recycled concrete aggregate (RCA) is a construction material, which is being used in the Canadian construction industry more frequently than it was in the past. The environmental benefits associated with RCA use, such as reduced landfilling and natural aggregate (NA) quarrying, have been identified by industry and government agencies. This has resulted in some incentives to use RCA in construction applications. Some properties of RCA are variable and as a result the material is often used as a structural fill, which is a low risk application. The use of RCA in this application is beneficial from an overall sustainability perspective but may not represent the most efficient use of the material. Efficient use of a material means getting the most benefit possible out of that material in a given application. The initial step in efficient material use is evaluating how a material affects its potential applications. In the case of RCA, this includes its use in concrete as a coarse aggregate. RCA is made up of both aggregate and cement mortar from its original application. Its make-up results in absorption capacities, which are higher than NA. Its high absorption capacity indicates that RCA can retain a relatively large proportion of water. Internal curing of concrete is the practice of intentionally entraining reservoirs of water within concrete. This water is drawn into the cement at a beneficial point in the cement hydration process. This water allows for a more complete hydration reaction, less desiccation, a less permeable concrete pore system, and less susceptibility to the negative effects of poor curing. The potential for RCA to act as an internal curing agent was evaluated in this research. Two RCA types were studied in the course of this research, one RCA of high-quality and one low-quality. These were compared to one NA type, which served as experimental control. Neither RCA type was found to desorb significant amounts of entrained water at relative humidity levels between 85% and 93%. This behaviour indicates that they would not behave as a traditional internal curing agent. Within concrete, the initial saturation levels of these RCAs were 0%, 60% and 100% of their full absorption capacity. The mixtures ranged from 30% RCA (by volume of coarse aggregate) to 100% RCA. These mixtures were subjected to two curing regimes, MTO-specified curing conditions and moist curing, in order to gauge the internal curing potential of the RCA. Fully saturated RCA mixtures were found to retain water throughout the course of testing. They were also found to increase the rate of compressive strength gain at early ages in comparison to similarly cured NA mixtures. Full saturation was found to have a negative effect on the thermal expansion behaviour of the concrete at 28 days concrete age. Permeable porosity of concrete was measured as an indicator of more thorough hydration in RCA concrete, but any potential benefits were masked by the increase in permeable porosity associated with permeable RCA. When compared with NA control mixtures and RCA mixtures cured under ideal conditions, it was found that saturated RCA mixtures provided compressive strength benefits. Low-quality RCA, which lost entrained water earlier in the testing period than high-quality RCA, benefitted in terms of early age compressive strength gains under specified curing conditions. High-quality RCA, which retained a relatively higher proportion of its entrained water throughout the early testing period, improved later age compressive strength under spec-curing conditions. Mixtures with 30% RCA (by volume of coarse aggregate) were generally found to not significantly affect the tensile strength, elastic modulus, and permeable porosity of the concrete. Tensile strength and elastic modulus were found to be consistently lower in RCA concretes, while permeable porosity was consistently higher. However, the magnitudes of these changes were not large enough to be statistically significant based on the testing regime employed. Compressive strength was significantly improved at 28 days when the 30% RCA was fully saturated. 30% RCA mixtures significantly reduced the thermal expansion of concrete at 28 days, which could provide particular benefit to concrete pavement applications. Overall, RCA saturation in new concrete had both positive and negative effects on the properties of concrete, which should both be considered in the context of the application for which RCA concrete is being considered. Specifically, concrete applications with the potential for poor curing and the need for reduced thermal expansion could benefit through the inclusion of coarse RCA. For example, these benefits could manifest in reduced thermal cracking at slab joints and reduced thermal stresses due to temperature gradients in pavements.