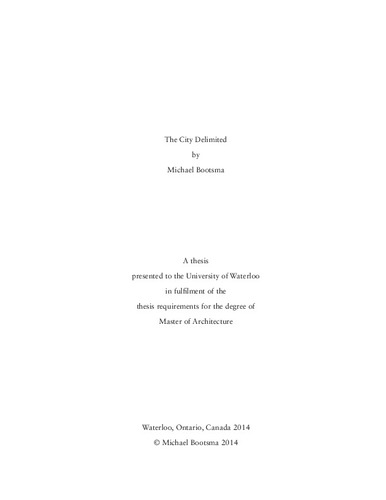 Positioning itself as an investigation into the affective capacity of transport, this thesis argues that the potential of a city is both composed and revealed through its systems of movement, contending that the sensorial and expressive qualities of a city’s transit govern how its citizens perceive and access the scope of experiences available to them. Essays on movement and identity, the limits of the city, immobility, adaptation, and eccentricities, move in parallel with meditations on departures, arrivals, and the time of transit toward a mandate for an amplification of motion and energy. The thesis traces a route from Ontario through London, Rome, and northern Europe before returning to Toronto only to founder in the region’s gridlock. To free the city’s constricted potential, a new passenger rail line running from Pearson Airport, through Toronto on the Canadian Pacific Rail corridor north of Dupont Road, to the site of Pickering’s future international airport is proposed. The key interchange of the new line, Lake Iroquois Station, is developed in detail, feeding on an intense overlap of historic and contemporary infrastructures. Located just south of the historic First Nations trading trail of Davenport Road at Dupont and Spadina, the station gathers the primary midtown electrical corridor, extensions of the Bathurst and Spadina streetcar lines, the existing University/Spadina subway, and expansions of the city’s cycling network, knotting them together with regional passenger rail in order to transport the city and its imagination.