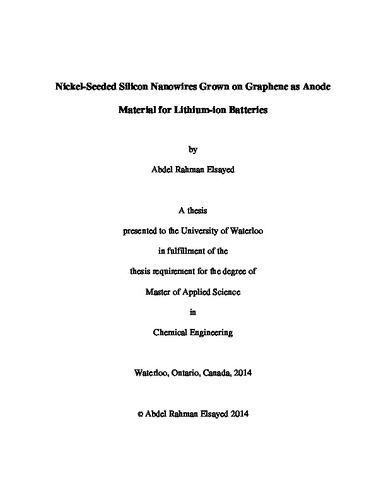 There is a growing interest for relying on cleaner and more sustainable energy sources due to the negative side-effects of the dominant fossil-fuel based energy storage and conversion systems. Cleaner, electrochemical energy storage through lithium-ion batteries has gained considerable interest and market value for applications such as electric vehicles and renewable energy storage. However, capacity and rate (power) limitations of current lithium-ion battery technology hinder its ability to meet the high energy demands in a competitive and reliable fashion. Silicon is an element with very high capacity to Li-ion storage although commercially impractical due to its poor stability and rate capabilities. Nevertheless, it has been heavily researched with more novel electrode nanostructures to improve its stability and rate capability. It was found that silicon nanomaterials such as silicon nanowires have inherently higher stability due to mitigation of cracking and higher rate capability due to the short Li-ion diffusion distance. However, electrode compositions based only on silicon nanowires without additional structural features and a high conductive support do not have enough stability and rate capability for successful commercialization. One structural and conductive support of silicon materials studied in literature is graphene. Graphene-based electrodes have been reported as material capable of rapid electron transport enabling new strides in rate capabilities for Li ion batteries. This thesis presents a novel electrode nanostructure with a simple, inexpensive, scalable method of silicon nanwire synthesis on graphene nanosheets via nickel catalyst. The research herein shows the different electrode compositions and variables studied to yield the highest achievable capacity, stability and rate capability performance. The carbon coating methodology in addition to enhancing the 3D conductivity of the electrode by replacing typical binders with pyrolyzed polyacrylonitrile provided the highest performance results.