Surface Modification and Characterization of Cellulose Nanocrystal for Biomedical Applications 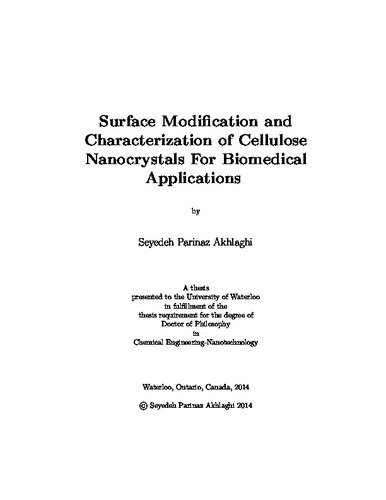 There is an ever-increasing desire to develop novel materials that could control the release of active compounds and increase their stability. Replacing petroleum-based synthetic polymers with sustainable materials has many advantages, such as reducing the dependence on fossil fuels, and diminishing environmental pollution. Recently, cellulose nanocrystal (CNC) obtained by acid hydrolysis of cellulose fibres has gained a lot of interest. The high mechanical strength, large and negatively charged surface area, and the presence of several hydroxyl groups that allow for modification with different functionalities make CNC an excellent candidate for various applications in the biomedical field. This thesis explores (i) the surface modification and characterization of modified CNC and (ii) the biomedical applications of these novel sustainable nanomaterials. In the first part, amine functionalized CNC was prepared. Ammonium hydroxide was reacted with epichlorohydrin (EPH) to produce 2-hydroxy-3-chloro propylamine (HCPA), which was then grafted to CNC using an etherification reaction. A series of reactions were carried out to determine the optimal conditions. The final product (CNC-NH2(T)) was dialyzed for one week. Further purification via centrifugation yielded the sediment (CNC-NH2(P)) and supernatant (POLY-NH2). The presence of amine groups was confirmed by FT-IR and the amine content was determined by potentiometric titration and elemental analysis. A high amine content of 2.2 and 0.6 mmol amine/g was achieved for CNC-NH2(T) and CNC-NH2(P), respectively. Zeta potential measurements confirmed the charge reversal of amine CNC from negative to positive when the pH was decreased from 10 to 3. TEM images showed similar structural properties of the nanocrystals along with some minor aggregation. This simple, yet effective synthesis method can be used for further conjugation as required for various biomedical applications. Moreover, the surface of CNC was modified with chitosan oligosaccharide (CSos). First, the primary alcohol groups of CNC were selectively oxidized to carboxyl groups using the catalyst, 2,2,6,6- tetramethylpiperidine-1-oxyl radical (TEMPO), and were then reacted with the amino groups of CSos via the carbodiimide reaction using N-hydroxysuccinimide (NHS) and 1-Ethyl-3-(3-dimethylaminopropyl)-carbodiimide (EDC). The appearance of C=O peak in FT-IR spectrum of oxidized CNC (CNC-OX), accompanied by calculations based on potentiometric titration revealed that CNC was successfully oxidized with a degree of oxidation of 0.28. The grafting of CSos on oxidized CNC was confirmed by the following observations: (i) the reduction of the C=O peak in FT-IR of CNC-CSos and the appearance of new amide peaks; (ii) the significant reduction of the carbonyl peak at 175 ppm in the 13C NMR spectrum for CNC-CSos; (iii) a higher decomposition temperature in TGA of CNC-CSos; (iv) a positive zeta potential of CNC-CSos at acidic pH; and (v) a degree of substitution of 0.26, which is close to the DO (0.28), indicating that 90% of COOH groups on CNC-OX were involved in the formation of amide bonds with CSos. TEM and AFM studies also revealed a completely diff erent morphology for CNC-CSos. In the second part, the potential of exploiting CNCs as delivery carriers for two cationic model drugs, procaine hydrochloride (PrHy) and imipramine hydrochloride (IMI), were investigated. IMI displayed a higher binding to CNC derivatives compared to PrHy. Isothermal titration calorimetry (ITC), transmittance and zeta potential measurements were used to elucidate the complexation between model drugs and CNC samples. It was observed that the more dominant exothermic peak observed in the ITC isotherms leading to the formation of larger particle-drug complexes could explain the increased binding of IMI to CNC samples. Drug selective membranes were prepared for each model drug that displayed adequate stability and rapid responses. Different in vitro release profiles at varying pH conditions were observed due to the pH responsive properties of the systems. Both drugs were released rapidly from CNC samples due to the ion-exchange e ffect, and CNC-CSos displayed a more sustained release profile. Furthermore, the antioxidant properties of CNC samples and the potential of CNC-CSos as a carrier for the delivery of vitamin C was investigated. CNC-CSos/vitamin C complexes (CNCS/VC) were formed between CNC-CSos and vitamin C via ionic complexation using sodium tripolyphosphate (TPP). The complexation was confirmed via DSC and UV-Vis absorbance measurements. TEM images showed complexes with a size of approximately 1 micron. The encapsulation efficiency of vitamin C was higher (91%) at pH 5 compared to pH 3 (72%). The in vitro release of vitamin C from CNCS/VC complexes exhibited a sustained release of up to 3 weeks, with the released vitamin C displaying higher stability compared to a control vitamin C solution. Antioxidant activity and kinetics of various CNC samples were studied using the 2,2-diphenyl-1-picrylhydrazyl (DPPH) assay. CNC-CSos possessed a higher scavenging activity and faster antioxidant activity compared to its precursors, CNC-OX and CSos, and their physical mixture. Therefore, by loading vitamin C into CNC-CSos particles, a dynamic antioxidant system was produced. Vitamin C can be released over a prolonged time period displaying enhanced and sustained antioxidant properties since the carrier CNC-CSos also possesses antioxidant properties. As a result of this doctoral study, knowledge on the surface modification of CNC with amine groups and CSos have been advanced. The in vitro drug release and antioxidant studies suggest that systems comprising of CNC could be further explored as potential carriers in biomedical applications.