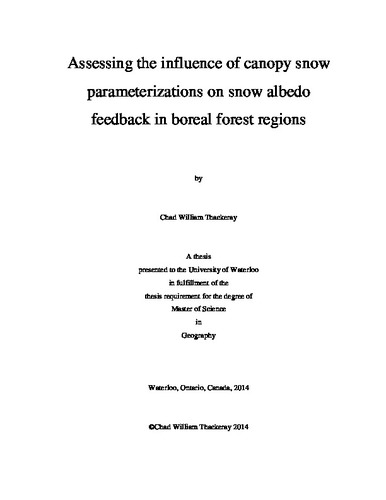 Variation in snow albedo feedback (SAF) among CMIP5 climate models has been shown to explain much of the variation in projected 21st Century warming over Northern Hemisphere land. Prior studies using observations and models have demonstrated both considerable spread in the albedo, and a weak bias in the simulated strength of SAF, over snow-covered boreal forests. Boreal evergreen needleleaf forests are capable of intercepting snowfall throughout the snow season, which has a significant impact on seasonal albedo. Two satellite data products and tower-based observations of albedo are compared with simulations from multiple configurations of the Community Climate System Model (CCSM4) to investigate the causes of weak simulated SAF over the boreal forest. The largest bias occurs in April-May when simulated SAF is one-half the strength of SAF in observations. This is traced to two canopy snow parameterizations in the land model. First, there is no mechanism for the dynamic removal of snow from the canopy when temperatures are below freezing, which results in albedo values in midwinter that are biased high. Second, when temperatures do rise above freezing, all snow on the canopy is melted instantaneously, which results in an unrealistically early transition from a snow-covered to a snow-free canopy. These processes combine to produce large differences between simulated and observed monthly albedo, and are the sources of the weak bias in SAF. This analysis highlights the importance of canopy snow parameterizations for simulating the hemispheric scale climate response to surface albedo perturbations. A number of new experiments are described as recommendations for future work.