The Knowledge of German Phrases in a Multilingual Context: An Empirical Study among German-Speaking Canadians 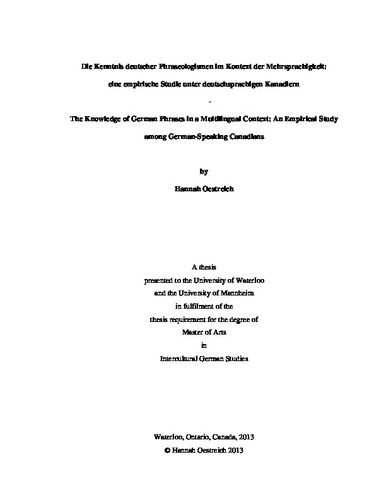 Idioms are a linguistic form which appear frequently in bilingual communication andplay a special role because of the way their meaning is generated. In my master thesis, I explored the understanding of idioms and conducted a study with German-speaking residents of Kitchener-Waterloo. My research question was how the use of English as a major communication language influences the German-speaking immigrant’s understanding of German idioms. In the thesis, I considered linguistic as well as extra- or sociolinguistic factors. For the linguistic factors that influence the immigrant’s understanding of idioms, I chose a psycholinguistic approach that relates the meaning and thus the understandability of idiomatic expressions to cognitive structures. Furthermore, I examined several sociolinguistic factors that influence language attrition. The three linguistic fields of phraseology (Burger, Dobrovol'skij), cognitive linguistics (Gibbs, Lakoff, Paradis) and language attrition (Liebscher) build the theoretical background. I created a questionnaire which consisted of 24 questions and was filled out by 58 participants, 27 by hand and 31 online. The idioms used in the study were randomly selected from a list of idioms at www.sprichwort-plattform.org. To analyze the questionnaires’ answers quantitatively, I used the statistic program SPSS. The analyzed linguistic factors were A. similarity between idioms in both languages, B. parallelism of the semantic and syntactic structures, C. idiomaticity. The results showed for A. that both very similar and not similar idioms are remembered well, for B. that separable idioms are remembered better than non-separable, for C. that non-idiomatic idioms are remembered better than idiomatic. According to the results, older immigrants, immigrants who were born in Germany, and who came to Canada a short time ago, had a better understanding of idioms. The factors gender, education, language skills, and language contact have not proved significant.

Hannah Sophia Oestreich (2014). The Knowledge of German Phrases in a Multilingual Context: An Empirical Study among German-Speaking Canadians. UWSpace. http://hdl.handle.net/10012/8421