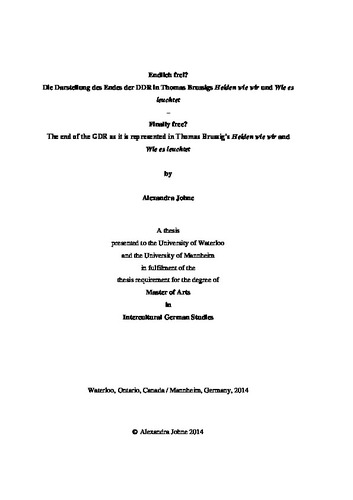 This thesis focuses on an analysis of the representation of the German Democratic Re-public (GDR) in two literary works by Thomas Brussig. The year between the summer of 1989 and the fall of 1990 was very eventful in Germany’s history. This time is called ‘Wende’, which finally ended with the reunification of the GDR and the German Fed-eral Republic. Since then, there has been a broad literary discourse about the ‘Wende’, which focuses on the time of the GDR itself, as well as its consequences afterwards. One of the authors involved in this debate is Thomas Brussig. This thesis will examine his two novels Helden wie wir (1995) and Wie es leuchtet (2004), which are both con-sidered to be part of the literary ‘Wende-dicourse’. Helden Wie Wir is regarded as one of the most important works within this genre. In this novel we find an accurate repre-sentation of the time and circumstances of the GDR, which ends with the fall of the Berlin Wall as the plot’s climax. Wie Es Leuchtet begins shortly before this event and describes the ‘German Year’ until the reunification. Therefore, both novels take place during the time of the GDR, represent how the ‘Wende’ developed, and bring the consequences it had for the country and its people in to consideration. The selection of these two stories is based upon the possibility that they allow to analyse different stations of the process of the ’Wende’. The main aspect which binds the novels together is the idea of ‘freedom’. The thesis will analyse the social structures of the time and answer the question of whether or not the ‘Wende’ is constructed as the protagonist’s liberation from a limited ‘power’. In order to achieve this, the thesis will utilize Foucault’s concepts of power and dis-course-relations. Since Foucault does not (against tradition) consider ‘power’ as some-thing that is completely possessed by the apparatus of the state, his ideas are helpful to analyse the distribution of power during the constructed time of the GDR, the “Wende”, and afterwards in literary works. Additionally, Foucault’s concept of resistance will help to analyse why the revolution, the fall of the Berlin Wall, and the end of the GDR came in to existence. Furthermore, this thesis focuses on discourses about sexuality, body and gender by means of Foucault’s ideas as well as Judith Butler’s concept of performativity in order to discuss difficulties in society. The theory the thesis follows is that all of the novel’s constructed forms of society, especially those during and after the ‘Wende’, are societies that ‘need to be’ normalised, and are therefore a border itself for the people to free themselves from. In the first chapter the essay describes the genre “Wendeliteratur”. Afterwards, it elabo-rates on the most important points of Michel Foucault’s and Judith Butler’s theoretical concepts. At last, it gives an analysis of Brussig’s two novels with help of these con-cepts. The examination of Helden wie wir mainly shows that it is the hierarchical society during the GDR and afterwards that sets borders on societal freedom, since there is a distribution of power throughout the whole of society in both cases. The examination of Wie es leuchtet shows even clearer that the collapse of the GDR does not simultaneously mean absolute freedom for society.