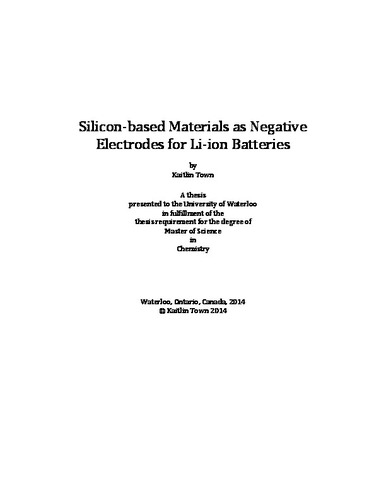 Silicon is a promising negative electrode material for lithium-ion (Li-ion) batteries, with volumetric and gravimetric capacities much higher than those in current commercial batteries. Implementation of Si as a negative electrode is halted, however, by a large irreversible capacity and declining reversible capacity over cycle life. These problems are linked to the large volume expansion that Si undergoes when reacted with lithium, and overcoming them is the focus of this thesis. To overcome this expansion, in the first part titanium silicides were proposed to buffer the volume expansion problem as Ti does not react with Li and is robust. A pure phase of the targeted TiSi and TiSi2 was not achieved, however one product mixture containing TiSi2 and Ti5Si3 was cycled against Li at C/20. A capacity of 715 mAh g-1 was achieved, however rapid capacity fade occurred over the first 10 cycles. The second part of the thesis focused on heterostructured Si-Ge and Ge-Si core- shell nanowires. The morphology of the nanowires allows for better accommodation of strain due to lithiation, and Ge functions as an active matrix, as it can store Li in a similar manner as Si. The specific capacities of the nanowires were good at 1346 mAh g-1 and 1276 mAh g-1, however after 50 cycles the Si-Ge nanowires had a capacity retention of 72.4 % and the Ge-Si retained 62.4 %. The diffusion coefficient of Li was determined from GITT and EIS to be within the range of 10-16 to 10-13 cm2s-1 and was slightly lower than other reported values, attributed to the dense structure of the nanowires slowing diffusion.