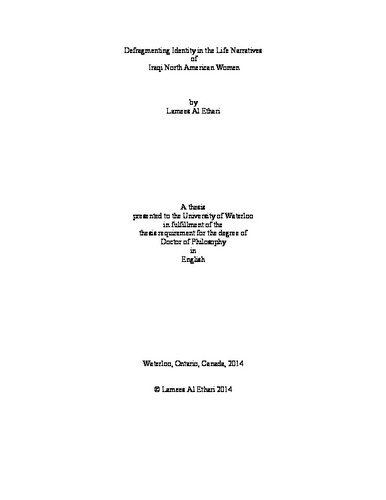 This dissertation examines contemporary Iraqi North American women’s life narratives within the frame of postcolonial autobiography theory. Through narrating their experiences of oppression, war, and displacement these women reveal the fragmentation of identity that occurs under such unsettling situations. However, I argue that in the course of narrating their stories and in spite of the fragmentation they suffer, these women are able to establish selves that distinguish and recover from fragmentation and loss through a process I term defragmentation. They are able to defragment their identities by reconstructing unique selves through the act of life narration, through relational remembering, and finally by resisting patriarchal and Western influences on how they perceive themselves and their experiences. Thus they are able to defragment their sense of disjointedness and reaffirm their sense of Iraqiness, even in the diaspora. This study explores the major causes of fragmentation in the work, which are divided into trauma and displacement. Unlike the studies and statistics that political approaches and media coverage have provided, these works shed light on the disruptions caused by war, oppression, separation from loved ones, and exile in the daily lives of these narrators or the lives of their friends and relatives. Therefore, in addition to the new identity that these women create in order to cope with their new lives in the West, they also construct a hybrid identity that is capable of recollecting and narrating these traumatic experiences. Within the space of hybridity, Iraqi North American women have to deal with vast differences between Western and Middle Eastern cultures; the transformation entails not just a change of place but an acceptance or understanding of a new culture, a new religion, and a new identity. The struggle of settlement, or re-settlement, becomes that of establishing an identity that does reflect the stereotypical images of Middle Eastern women in Western perceptions and a struggle to maintain selves that can contain both the past life and the present in what can be considered a third space. Although the main topic of this dissertation is defragmentation in the life narrations of Iraqi North American women, this study also covers the cultural and political history of Arabs in general, and of Iraqis specifically. There are also references to the migrations of Arabs to North America and a brief background of the roots of Arab North American literature. These topics will be discussed in order to provide an understanding of the histories from which these women, or their families, have migrated and their positions within Western culture and scholarship. In addition, this approach provides an insight into the complexities of these women’s identities that reflect multi-layered affiliations, interests, and cultures. The works chosen for this study include written and oral life narratives by Iraqi North American women who write from Canada and the United States. These works are Zaineb Salbi’s Between Two Worlds: Escape From Tyranny: Growing Up in the Shadow of Saddam (2005), Dunya Mikhail’s A Diary of a Wave Outside the Sea (2009) and a National Film Board documentary titled Baghdad Twist (2007), by Jewish Iraqi Canadian Joe Balass. In the documentary, Joe Balass interviews his mother, Valentine Balass, as she recounts growing up in Iraq and later experiencing exile from her homeland. The final work I address is The Orange Trees of Baghdad: In Search of My Lost Family (2007) by Leilah Nadir, a Canadian born Iraqi writer. Through her memoir Nadir tries to reconnect with her father’s family in Iraq while uncovering their traumatic experiences of the Gulf War. The narrators in my research belong to different social classes, age groups, and practice different religions, but they all identify themselves as Iraqi women. These women, through their interpretations of living life between two (or more) cultures, offer important perspectives not only on their own ethnic society, but also on the role of ethnic women in North American society in general. There has been a massive increase in the migration of Iraqi women to North America in the last thirty years; their perspectives on political, social, and religious changes are an important part of understanding the experiences of this ethnic group. Through their life narratives, these women are able to display their unique selves by portraying their ability to contest the boundaries and limitations of borders and societies that try to eliminate one identity or the other.