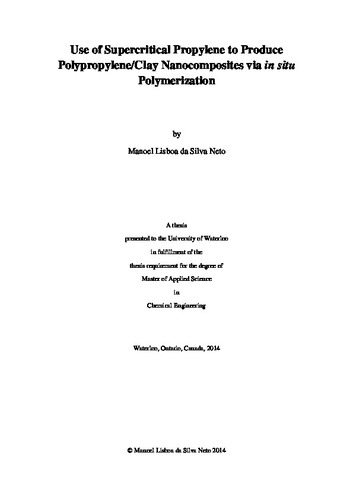 Nanocomposites have been receiving a lot the attention in the last decade from both industry and academia, since a small amount of nanofiller can significantly improve the materials properties. In the field of thermoplastics, polypropylene (PP) is one of the most used materials , due its easy processability, good balance of mechanical properties, and low cost. However, PP has certain shortcomings such as poor gas barrier and low thermal stability which limit its application. In order to be classified as nanocomposite the material needs to have at least one phase with one dimension less than 100nm. The properties achieved by nanocomposites will depend on the type of polymer, type of dispersed phase (filler), surface interaction between filler and polymer, and the production method. Nanofillers present many shapes and sizes, but they can be grouped in nanoparticles, nanotubes and nanoplates. Montmorillonite (MMT) is a clay that has been extensively studied to produce PP nanocomposites, due to its availability, high aspect ratio, high modulus and high cation exchange capacity, characteristics that result in composite with improved properties. Three different morphologies can be observed in PP/MMT nanocomposites: agglomerates (similar to the conventional composites); intercalated; or exfoliated. Among these morphologies, exfoliation is the most desirable and the hardest to be achieved in PP/MMT nanocomposites. Several methods have been used to produce PP nanocomposites. They can be grouped in three main groups: solution blending; melt processing; and in situ polymerization. In order to produce an exfoliated nanocomposite, some methods have assisted the exfoliation using supercritical fluids. Supercritical carbon dioxide is by far the most explored one. Polypropylene is a semi-crystalline polymer and its properties rely on amount of its crystallinity, which is related to its stereochemical configurations. Isotactic PP and syndiotactic PP result in a semi-crystalline polymer while atactic results in an amorphous polymer. Two catalyst systems can be used to produce isotactic PP: Metallocene and Ziegler-Natta (ZN). This research study was carried out in order to develop an appropriated process to produce PP/MMT nanocomposites with a high level of exfoliation using in situ polymerization assisted by supercritical propylene. The main idea is to use supercritical propylene to treat the montmorillonite before polymerization. In this process, the small molecules of propylene diffuse inside the clay galleries under supercritical conditions (high pressure and temperature) until reaching complete saturation. Once this saturation is reached the mixture of polypropylene and clay is catastrophically decompressed and fed into an autoclave reactor. The propylene polymerization reaction is them catalyzed by ZN catalyst. The pressure of the mixture of propylene-montmorillonite from the supercritical condition to the reactor autoclave decreased significantly, allowing propylene to expand and exfoliate the clay as it was fed in the reactor. Propylene in supercritical conditions was used in this works because it is the monomer for the subsequently polymerization and because its good properties at supercritical conditions. In order to evaluate the results the following methods were used: transmission electron microscopy (TEM) to investigate the nanoscale sample morphology and evaluate the clay exfoliation, X-ray diffraction (XRD) to determine interlamellar distance, d001, of the clay, differential scanning calorimetry (DSC) to determine the amount of crystallization of polymer and composite, thermogravimetric analysis (TGA) to determine composite clay content, scanning electron microscopy (SEM) to evaluate the morphology, and clay swelling test to evaluate the compatibility among various pairs clays-solvent. The first part of this work evaluated the interaction and swelling effects of different pairs of clay-solvent with or without sonication. This was necessary in order to choose the best clay to carry out the study. Four solvents with different polarity (chlorobenzene, toluene, cyclohexane and hexane) and eight clays (seven organically modified and one unmodified) were evaluated with or without sonication. Closite 15A and 93A presented the best results with different solvents and they were selected for further experiments. The experiments also showed that sonication improves the swelling of the clay. Initial screening of the polymerization reaction was carried out using two conditions: feeding supercritical propylene without clay and adding clay without the addition of supercritical fluid. The addition of supercritical propylene did not modify the morphology and properties of PP in comparison to the normal polymerization. The addition of Cloisite 15A or Cloisite 93A (pre-treated with toluene, not with supercritical propylene) produced nanocomposites. Although Cloisite 15A showed better results on the swelling tests, Cloisite 93A presented much better polymerization yield, therefore it was selected for further investigation using treatment with supercritical propylene. Cloisite93A was submitted to a treatment under four different supercritical propylene conditions (temperature and pressure) for thirty minutes. Each mixture was subsequently fed to the reactor through a catastrophic expansion inside an autoclave reactor running a propylene polymerization reaction. The results from XRD and TEM show a significant improvement on the exfoliation when treating the clay under supercritical propylene conditions followed by in situ polymerization, as compared to the in situ polymerization without treating the clay with supercritical propylene. In conclusion, the utilization of supercritical propylene has improved the dispersion of the clay at the nanoscale during the preparation of these nanocomposites by in situ polymerization.