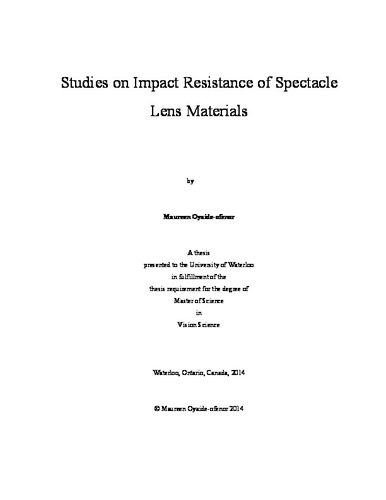 Introduction: The Canadian Standards Association (CSA) Z94.3-07 ballistic impact test for industrial lenses, tests the ability of a lens material to withstand the impact of a 6.4 mm diameter steel ball travelling at a speed of 46.5 ± 0.5 m/s. The specific testing is waived if the lens made of various materials meets a minimum centre thickness requirement. New lens materials, like Hi-Vex, are not included in this list. The first study compared the breakage speed of Hi-Vex lenses to CR39 lenses at different conditioned temperatures. In the process of carrying out the literature review, it became apparent that the definition of lens failure varied. This led to the question as to how naïve individuals may interpret a National Standard definition of lens failure after being impacted by a missile. Naïve subjects were asked to classify impacted lenses as either pass or fail based on the written CSA Z94.3-07 failure criterion. Purpose:   Study 1: To investigate the impact resistance of a mid-index plastic lens material Hi-Vex (n=1.56) at different temperatures. Study 2: To investigate if people actually understood what the CSA classifies as a failed lens. Methods:  Study 1: Two groups of plano hard coated lenses were tested: CR39 and Hi-Vex. Lenses were ordered with 3mm centre thickness, cut to 50mm diameter and edged to achieve the Hide-a-Bevel® which was in agreement with the CSA requirement for prescription industrial safety lenses and frames. A pneumatic gun was used to propel a 6.35mm steel ball at the centre of each lens. Impact speed was varied using the Zippy Estimation by Sequential Testing (ZEST) protocol to determine the threshold breakage speed. Combined uncertainties as defined in the International organization for standardization (ISO) Guide to the expression of uncertainty in measurement were used to determine the statistical significance of all comparisons of the data sets. Study 2: Ten graduate students from the School of Optometry and ten patients from the general public were given 25 spectacle lenses that had been subjected to the ballistic impact test. They were asked to classify the lenses as either a pass or fail after reading the definition of a failure under the ballistic impact test in CSA Z94.3-07 clause 6.1.3.1. Lenses were presented to the participants in the same order. The responses of both groups of participants were compared to the classification of two experienced researchers who agreed on 100% of the lens outcomes. Results:  Study 1: The threshold breakage speeds of the industrial thickness Hi-Vex and CR39 lenses at 24°C were 50.88m/s and 50.64 m/s and at -29°C, 52.57m/s and 52.56 m/s respectively. Both comparisons were not statistically significant. The corresponding threshold breakage speeds for Hi-Vex and CR39 lenses at -49°C were 66.38m/s and 49.66m/s and at 50°C were 57.01m/s and 53.54m/s respectively. Both comparisons were statistically significant. Study 2: There were only two lenses in which all participants agreed with the outcome. These lenses were failed lenses. The naïve subjects were more likely to classify a lens that passed as a failure than a failed lens as a pass. This trend was more obvious in the general public results although the results across the various lenses for the graduate students and general public were not statistically different. Conclusions:  Study 1: We found that the mean breakage speeds of the Hi-Vex and CR39 lenses were greater than the level required of eye protector lenses by the Standards American National Standards institute (ANSI) Z87.1-2010 and CSA Z94.3-07. Hi-Vex was also superior to CR39 at more extreme temperatures with a threshold breakage speed of 57.01±3.51m/s at 50°C and 66.38±4.00m/s at -49°C. Although its impact resistance was less than that of both Trivex and Polycarbonate lenses, Hi-Vex may provide an acceptable level of impact protection in industrial settings. This is the first study to concomitantly assess impact resistance of a new lens material as well as compare the impact resistance at various temperatures. Study 2: Simply reading the definition of a lens failure is insufficient. Some type of training with actual lenses may be necessary. Whether revising the text of the Standard or repeating the instructions several times would reduce this problem is uncertain. Both the graduate students and general public tended to be more conservative in their classification of failure. If there were any visible damage to the lens as a result of the impact, at least one person would classify the lens as a failure regardless of whether the damage met the CSA definition. This result suggests that the vision care community and CSA may need to educate the public on the meaning of impact resistance of eye protectors.