Assessing the use of δ18O-PO4 analysis for tracing source inputs and the cycling of phosphorus: Applications to the Grand River 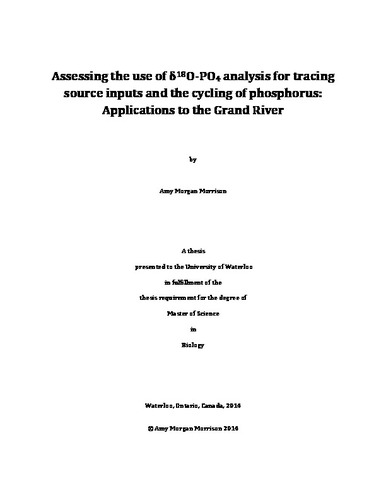 The use of δ18O- PO4 analysis was assessed for the Grand River, a highly impacted river in Southern Ontario that receives inputs from 30 WWTPs. Significant nutrient inputs within the watershed have led to prolific aquatic plant growth, particularly within the central Grand River where this study is focused. Two of the largest WWTPs in the watershed fall within this region and these plants are in close proximity to each other (approximately 20 km apart). Various laboratory tests were carried out to assess the suitability of several DOM removal methods on Grand River water and WWTP effluent prior to mass spectrometric analysis with varying results. Sample analysis showed all river sites to possess δ18O- PO4 values that were elevated relative to equilibrium. These sites are not equilibrium-controlled and, instead, possess δ18O- PO4 signatures controlled by either source inputs, or isotopic fractionation. The second WWTP was shown to deliver PO43- that was elevated relative to equilibrium. WWTP effluent in this study displayed a large δ18O -PO4 range, ranging from 10.4 to 22.9‰. Most of the variation in isotopic composition was found at the second plant, which had high soluble reactive phosphorus (SRP) and a range of 12.5 to 22.8‰ (n = 3). The first plant showed little variation with much lower SRP and a mean value of 11.4 (SD ± 1.0‰, n = 2). The elevated δ18O- PO4 signatures collected from the second WWTP suggest that this plant is supplying the Grand River with isotopically distinct PO43-. This could be used as a way to establish the effect of the second WWTP on the downstream PO43- pool. Phosphate uptake and release by the epilithon and seston were measured using 32P-PO4 additions in recirculating beaker experiments. Two sites, one downstream of the first WWTP and one below the second WWTP, were assessed for gross and net PO43- uptake rates. The gross uptake rates at both sites were low (0.04 to 0.10 µg P cm-2 h-1), with long turnover times for the dissolved phosphate pool (12 to 40 h). Long uptake lengths (30 to 144 km) were measured, indicating low nutrient retention capabilities downstream of the two WWTPs. These significant P contributions appear to have large-scale effects on the river’s P-kinetics, limiting its ability to act as a net nutrient sink even in the more productive summer months. The biomass response below the WWTPs is insufficient to compensate for the elevated PO43- concentrations and low rates of PO43- uptake. Due to the limited use of δ18O -PO4 analysis in river systems, no model exists for predicting the response of δ18O -PO4 with distance downstream of a point source. Coupling rates of PO43- uptake and release with the effluent δ18O -PO4 values provides such a model and generates guidance for future use of this method in lotic environments. WWTP “plume chases” were previously carried out in the Grand River, and involved measuring SRP at several sites downstream of the WWTP discharge points. SRP was used as a proxy for PO43- concentration in this study, and is operationally defined by what passes through a 0.20-µm membrane filter and is molybdate reactive. Best-fit estimates of PO43- uptake and release were determined using these plume chase events. The rates calculated using the 32P-PO4 uptake and release beaker experiments were up to 50 times lower than the best-fit parameters. This exercise illustrates the unsuitability of relaying estimates of P kinetics collected through beaker experiments to an ecosystem level. Model predictions for the river reach below the second WWTP show that effluent δ18O -PO4 signatures should be observable many kilometres from the plant. Because of the unique mean isotopic composition observed for the second WWTP, sampling could occur at a variety of locations downstream to observe the effect of this plant on the river. The river reach below the first WWTP reduces the incoming P loads much quicker than the second reach, which is in part due to the much lower effluent SRP released by the first plant. It is still possible to isolate effluent derived δ18O-PO4 values downstream of this plant. The return to equilibrium is projected to occur several kilometers from the first plant’s confluence, suggesting the applicability of this method in both stream reaches. It would appear δ18O -PO4 could be a valuable tool for eliciting information on P cycling in effluent-impacted river ecosystems, with the Grand River possessing elevated but seemingly typical uptake lengths amongst eutrophic streams.

Amy Morgan Morrison (2014). Assessing the use of δ18O-PO4 analysis for tracing source inputs and the cycling of phosphorus: Applications to the Grand River. UWSpace. http://hdl.handle.net/10012/8405