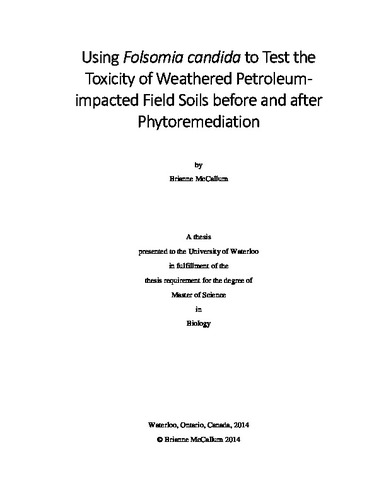 The Canadian Council of Ministers of the Environment (CCME) developed guidelines for petroleum hydrocarbon (PHC) impacted field soils based on the “worst case” scenario of a fresh petroleum spill (CCME, 2001b; CCME, 2008b). Therefore, when these guidelines are applied as remedial benchmarks, they may be too conservative to be used as realistic targets as they do not account for weathering, which has been shown to decrease the toxicity of PHCs in soil. Chronic toxicity tests were performed using weathered PHC-impacted field soil from three different field sites (ON1, AB1 and BC1) and Folsomia candida. The highest PHC concentration of soil obtained from ON1 (635 mg/kg F2 and 12,000 mg/kg F3) and AB1 (610 mg/kg F2 and 2,900 mg/kg F3) did not affect F. candida survival and reproduction. However, when F. candida were exposed to PHC-impacted soil obtained from the BC1 site, a LC25 of 2,809 mg F2 + F3/kg was calculated for adult survival while an IC25 of 1,030 mg F2 + F3/kg was calculated for juvenile production. The toxicity at BC1 was postulated to be caused by the F2 concentration (it was the only site with high F2). Heat extraction and floatation methods were compared using the soil obtained from the ON1 field site. The number of adults obtained using the floatation method was always higher than the total number of adults obtained from the heat extraction method; however, only two of these results were statistically significant. This suggests that the floatation method is the best method to use to extract Folsomia candida and also indicates either method can be used with no significant effect on the conclusions. Chronic toxicity tests usually focus on measuring sub-lethal endpoints; however, only juvenile production was included in the Environment Canada protocol (Environment Canada, 2005; Environment Canada, 2007a). The endpoints of weight, length and width were added to chronic toxicity tests on AB1 and BC1 soils to determine if they were suitable endpoints. The highest concentration tested for AB1 (610 mg F2/kg and 2,900 mg F3/kg) had no effect on the weight, length or width of the adults. However, the toxicity data obtained for the BC1soils provided an EC25 of 421 mg F2 + F3/kg, 13,750 mg F2 + F3/kg and 17,425 mg F2 + F3/kg for weight, length and width, respectively. The EC25 of 421 mg F2 + F3/kg obtained for the weight of adults is lower than the IC25 of 1,030 mg F2 + F3/kg obtained for juvenile production which indicating that weight is a more sensitive endpoint than juvenile production. Avoidance-response tests involved placing a control and test soil on either side of a cylindrical container and adding 20 Folsomia candida to the midline (Environment Canada, 2007a; Liu et al., 2010). The results using soil obtained from AB1 showed no trend between soil avoidance and increasing PHC concentration. However, the avoidance-response test, using soil obtained from BC1, indicated that F. candida avoidance increased with increasing petroleum concentration. These results show that avoidance-response tests were able to predict the outcome of the chronic toxicity tests. Overall, the above results indicate that the CCME guidelines are too conservative to apply to weathered PHC-impacted field soil when the impacts are primarily F3. Results also indicate that F2 and F3 concentrations of 250 mg/kg and 2,900 mg/kg, respectively would not adversely affect F. candida adult survival, juvenile production or adult weight.

Brianne McCallum (2014). Using Folsomia candida to Test the Toxicity of Weathered Petroleum-impacted Field Soils before and after Phytoremediation. UWSpace. http://hdl.handle.net/10012/8404